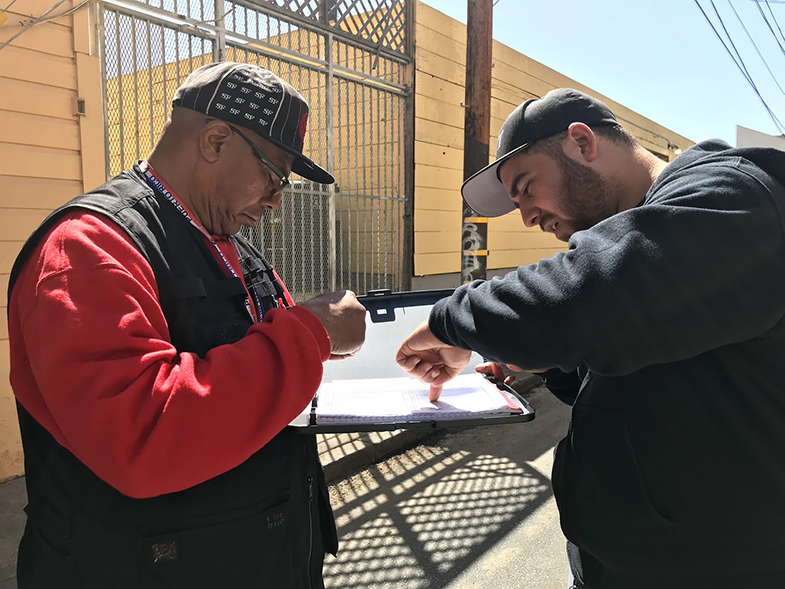 A new BART-dedicated Homeless Outreach Team (HOT) that will expand coverage to San Francisco's Mission District got their orientation last week -- quickly showing how valuable they will be in helping the homeless out of BART's stations and plazas and into social services.

“The fact is that BART is not a place of residence, and when the trains stop running the doors close at this place of business," said Armando Sandoval, the BART Police Department’s crisis intervention coordinator and community outreach liaison, who conducted the orientation for the new team members.  “We are fortunate to have the HOT team provide a service to assist those in need, and lucky to have this kind of partnership that most transit systems don't have in place.”

The BART partnership is with the San Francisco Municipal Transportation Agency (SFMTA) and SFHOT, a division of the San Francisco Department of Homelessness and Supportive Services. The BART-specific teams are funded by BART as part of a $1.6 million quality-of-life improvement initiative that was made in the Fiscal Year 2019 budget, which runs through June 30, 2019. The initial team focused on Embarcadero, Montgomery, Powell and Civic Center Stations for the past year.

The new team will cover 16th St./Mission and 24th Street/Mission, engaging with the immediate areas near the BART stations, which will include individuals from SRO’s or single-room-occupancy housing in the area, as well as programs from churches, social services and other programs that provide support to the homeless and others struggling with mental health and addiction challenges who end up at stations. BART is proposing continued funding for dedicated HOT teams in the Fiscal Year 2020 budget that begins July 1, 2019.

Jorge M. and Jackie J. are the two HOT team members who will work in the Mission, and both have lived and worked for decades in the community and have deep connections to its people and its resources.

Their rapport was evident as they did a training walk-along with Sandoval and BPD Officer Eric Hofstein, who is part of a specialized detail that focuses on quality-of-life issues and has advanced training in crisis response. In many cases, the homeless population he interacts with are in some type of crisis, whether it is mental illness, drug involvement, trauma survivors or some combination. He welcomed the additional resources to help at the Mission stations, where the workers will make their rounds without PD assistance but still keeping lines of communciation open.

"Every station is different and it's great to have these outreach workers in the Mission who already know the community," he said. "The population we see there tends to be an older crowd, often with a lot of medical issues; it's not the new-in-town faces that you will see at Powell Street or the more hardened-to-the-street-life people that we see at Civic Center."

On this warm spring day, the 16th Street Plaza was mostly filled with people listening to music, laughing, soaking up the sun, without the shopping carts or bags of belongings often carried by the homeless. Just a short distance away in an alley, however, there were people on both sides slumped against buildings, gaunt and disheveled.

Jorge and Jackie took opposite sides of the street and went by, checking on each person. They asked, "How are you feeling today?" and whether the people would like to go to a neighborhood center where they could get medical attention, cool off or safely store their items in a locker while they took a rest. One woman, seeing Jorge, jumped up and gave him a huge hug. "How you been, mija?" he asked, using the Spanish contraction for “mi hija”  or “my daughter” that is a common Latin American term of affection.

Jackie, a bubbly, smiling woman who has worked as an emergency responder, knelt down to the level of people sitting on the sidewalk and struck up easy conversation. "Do you need something to eat?" she asked a man who shook his head, no, but perked up to talk with her and share a laugh. Jessie J., who works on the HOT team dedicated to downtown San Francisco stations, showed Morales and Johnson how data sheets are used to document contacts so that evidence-based decisions can be made.

They walked over to the Mission Neighborhood Center on Capp Street, where inspirational messages ("Eres Belleza"/"You are beautiful") are written on the brightly colored walls. There are sign-ups for beds to spend the night, medical providers, television and other entertainment, and a sense of controlled chaos as people drift in and out.

A tiny woman in shorts rode a scooter through the center until the receptionist told her she'd have to take it outside. Jorge knew her, too, by her nickname "Little Bit." He seemed to know everyone; as cars passed by, drivers rolled down their windows to say hello to him.

The homeless population around the Mission stations, even with its characteristics unique to that community, has much in common with those elsewhere in the region.

Sandoval breaks down homeless populations into three categories. First, there are those who are voluntarily capable of choosing to accept services and do so. Second, there are those who are incapable of making a choice to accept services, often because of their mental health or drug addiction problems; those may go down a medical, psychiatric, or criminal justice path to services, depending on their needs. Third are those who make a conscious choice to refuse services;  they are most likely to go down a criminal justice path, where they may eventually, but not always, have a change of heart and finally accept services to work on their issues.

The latest BART Customer Satisfaction Survey shows a continued need to address the problem of homelessness, which spills over into BART stations from the communities BART serves, and which has been exacerbated by the housing crisis.

"Homelessness is such a huge problem, and no one entity can solve it," said Lt. Angela Averiett, who commands the patrol staff for BART stations from Embarcadero all the way to Millbrae. "We're going to have to work together on multiple fronts. This is another step in that process."

BART is also taking a District-wide approach to reduce homelessness problems in all four counties where it currently operates, include a recently launched team in Contra Costa County.  Strategies include: