BART is making more progress with its plan to maximize capital rebuilding work while ridership remains low because of the COVID-19 pandemic.  Since BART reduced service hours in March there has been an increase in the amount of time workers can spend in the trackway to improve the system.

One of the most prominent examples of where the increase in wrench time is paying off is with the effort to replace aging power cables in downtown San Francisco. The 34.5kV (kilovolt) electrical cables provide power for BART’s trains and in many cases have been in place since BART began service in the early 70s.  BART had originally expected to pull 7,000 feet of 34.5kV cable during the last three months.  But instead workers have managed to pull 23,000 feet of new cable.  Riders are gaining the benefit of a more reliable system and are having to endure fewer impacts to get it.  The increased productivity means the project can potentially eliminate 35 future weekends when BART would have had to delay riders by running single-track service through the work area.

Work is moving forward in multiple areas.  BART is replacing coverboards across the system.  Those are the white, curved fiberglass shields that protect the third rail.  Since the arrival of the pandemic, BART has replaced 6.9 miles of coverboards.  BART had originally expected to get through only 3.8 miles of coverboards at this point, which means the project is approximately three months ahead of schedule.

BART staff has compiled a list of Capital Projects that have benefited from increased access due to reduced service hours:

Many things in the Bay Area have slowed down during the current Coronavirus crisis. But BART is continuing work to improve our system and rebuild aging infrastructure.

BART crews have been coming to work to continue their capital projects. With extremely low ridership and new 9pm service closure, capital workers are taking full advantage to make progress.

Capital projects are not paid for by operating funds, meaning our 90% ridership dip (visit here to see a detailed chart of BART's ridership decline the past four weeks) and related huge revenue loss have not impacted infrastructure work. Many capital projects currently at work are paid for by Measure RR, a voter-approved bond measure passed in 2016 in the three BART District counties.

At 19th Street Station, crews were demolishing the long-closed restroom in the station last week to remodel the restroom and re-open it. The modernization project includes re-opening renovated underground station restrooms, upgrading station lights, reconfiguring the concourse, installing a platform elevator, repairing flooring and wall tiles, among many other changes. 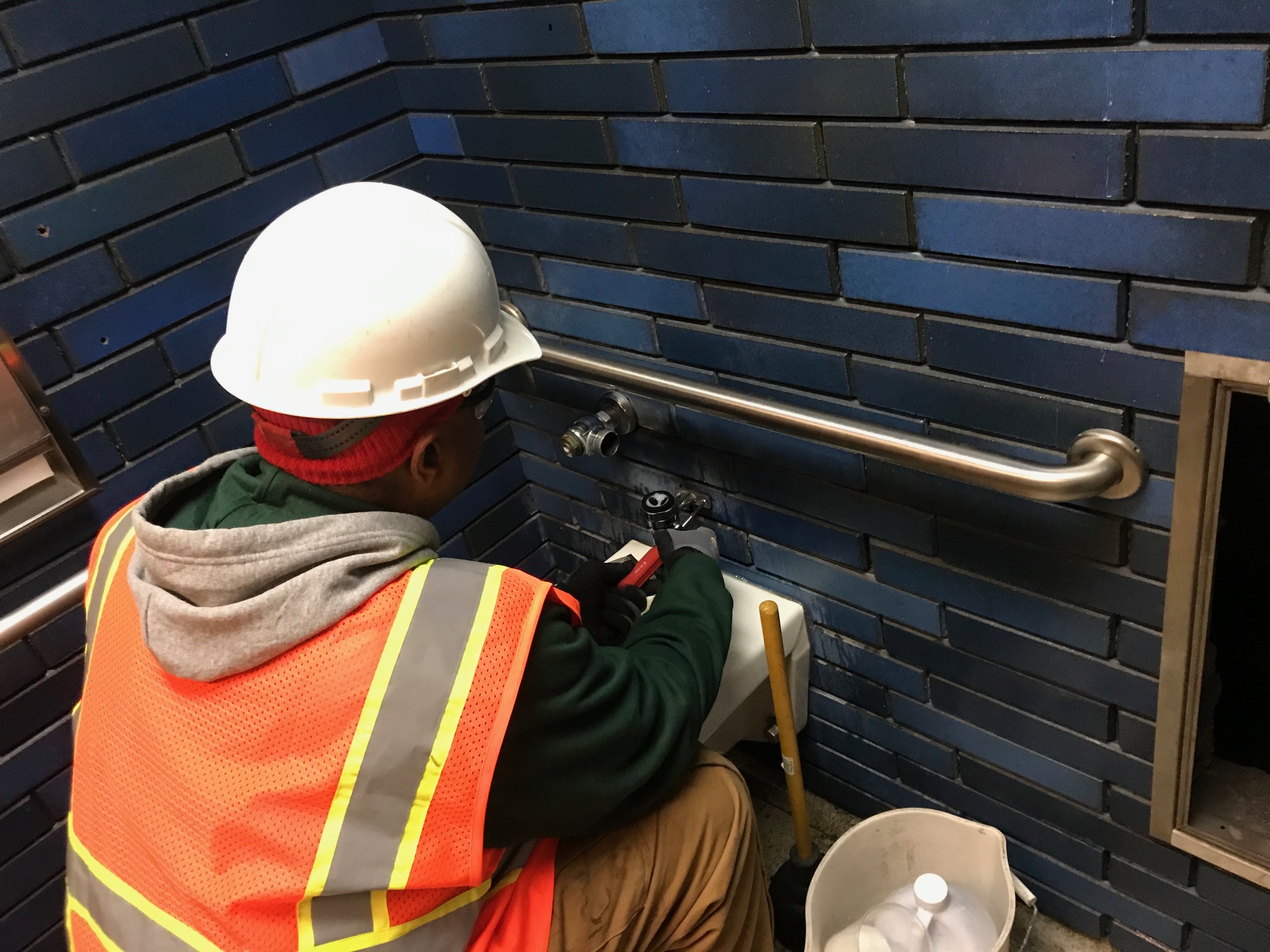 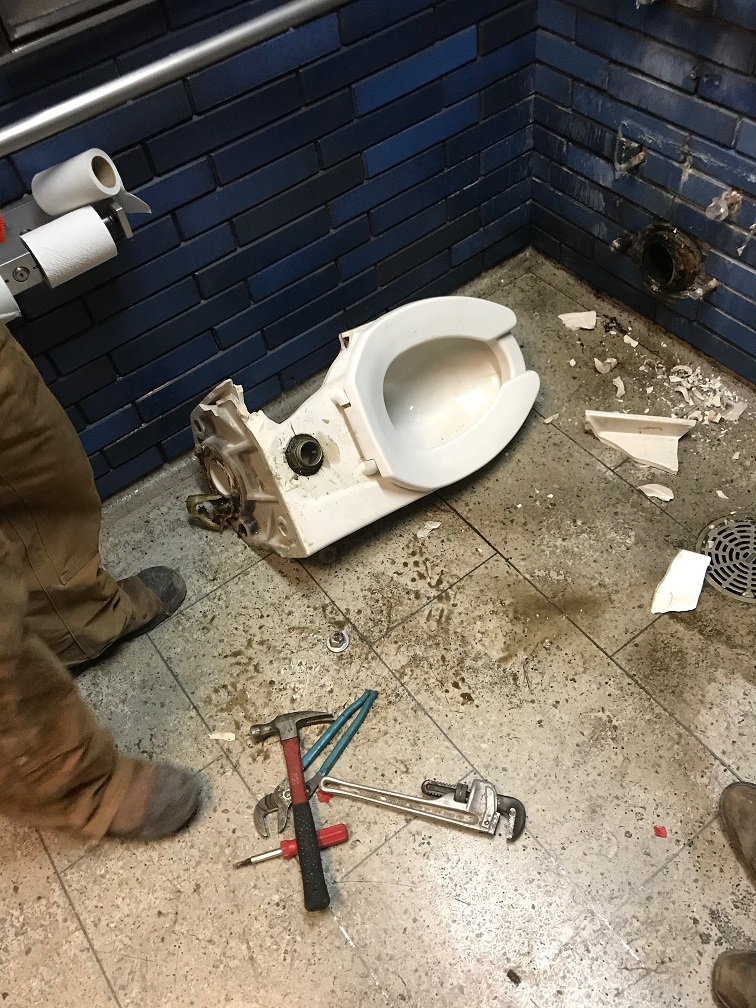 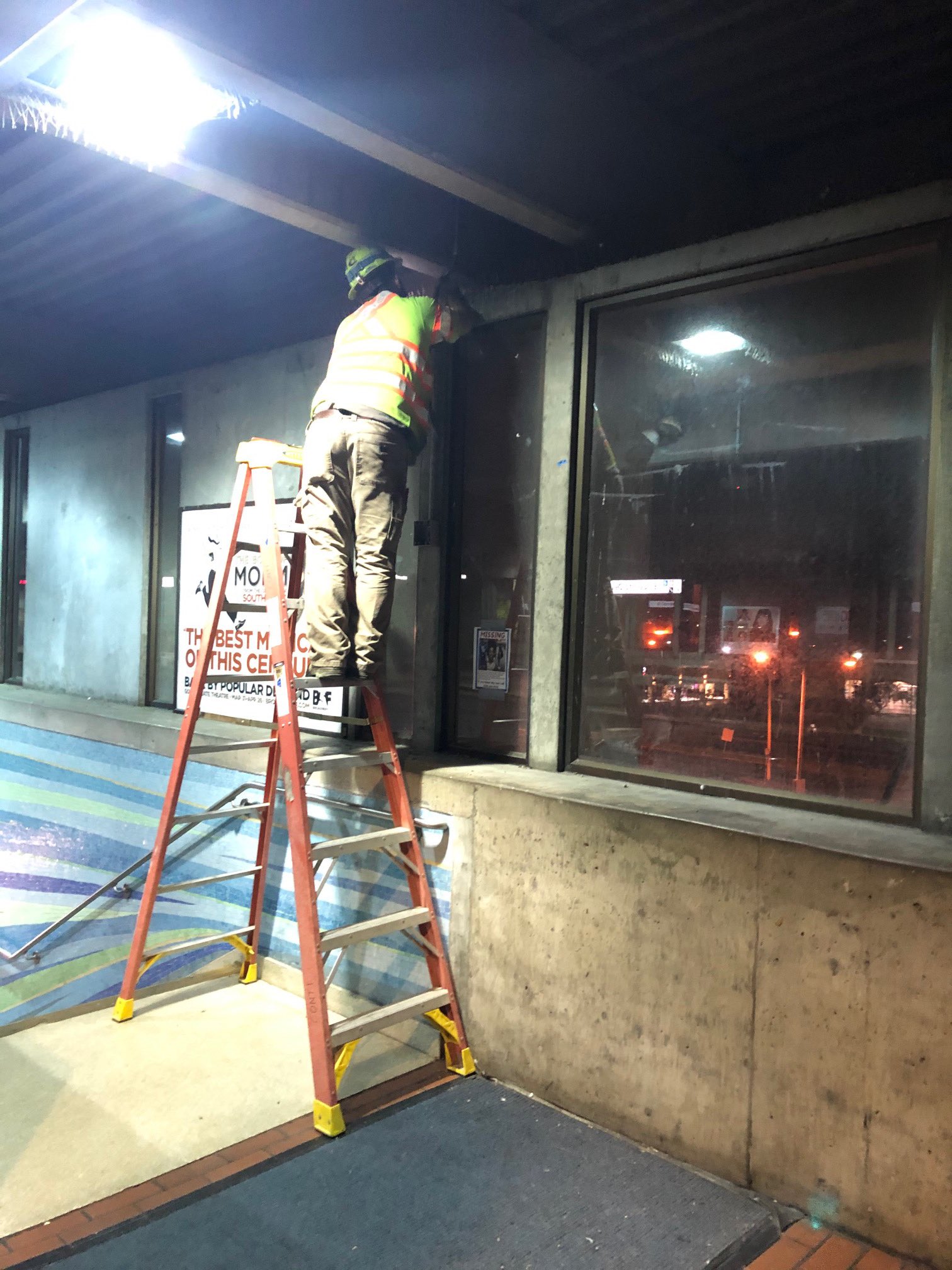 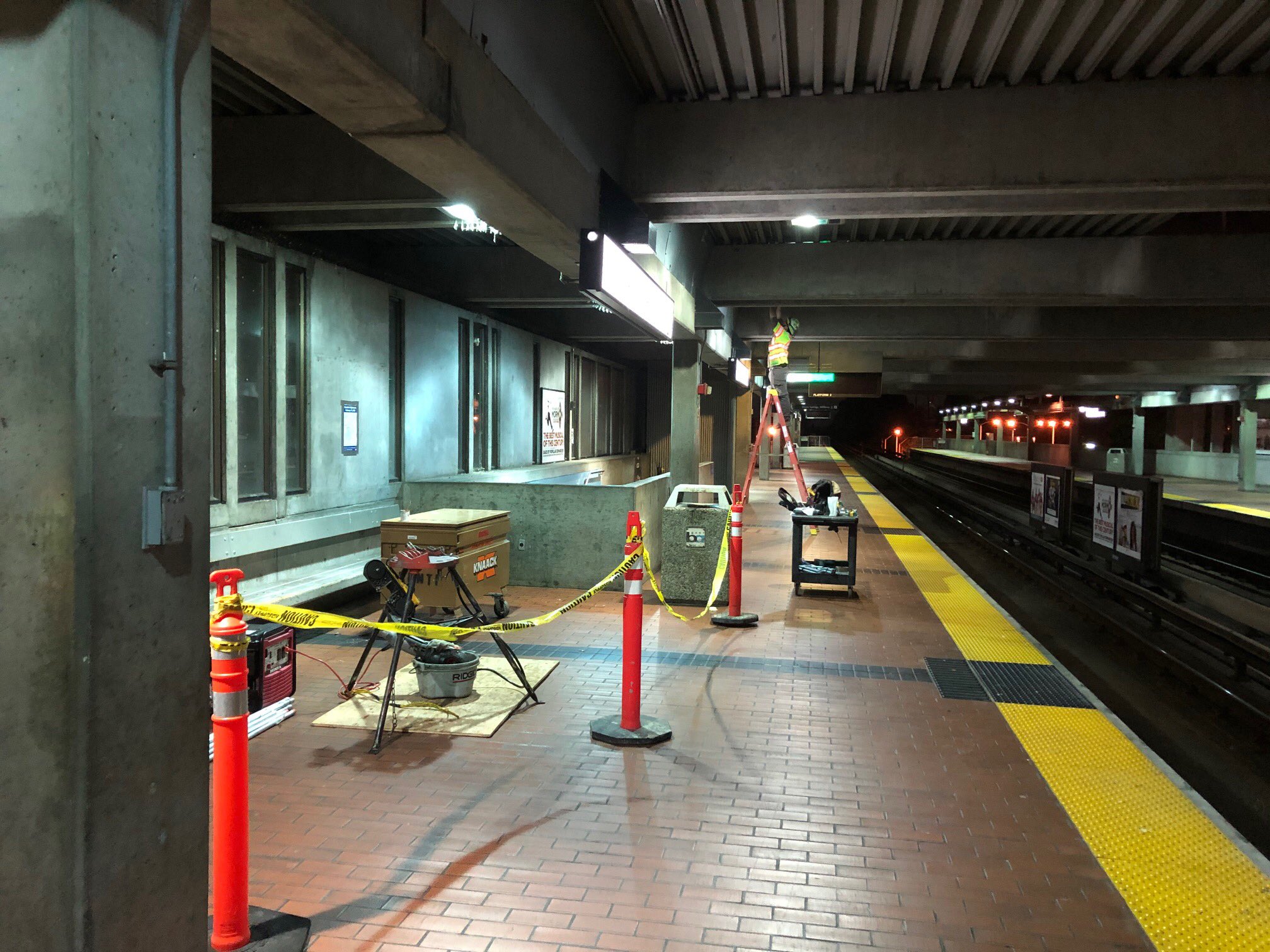 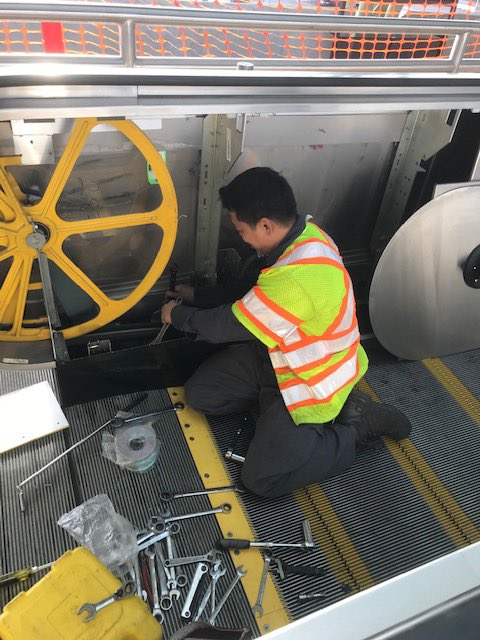 At Civic Center station, crews installed a new step chain in an often-used escalator at Market and 8th St. 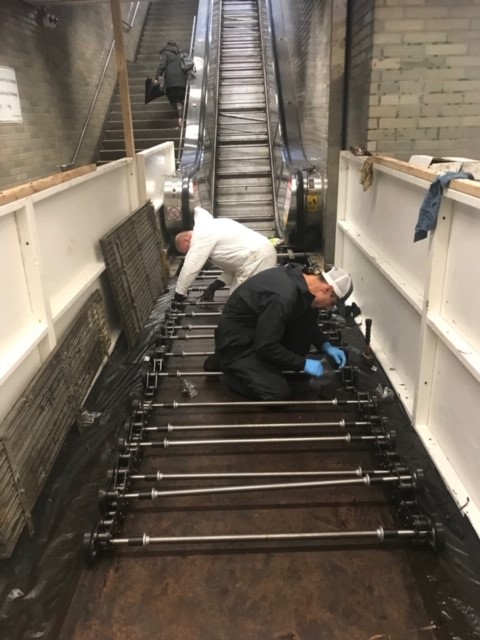 The photo below was from a track replacement between South Hayward and Union City held Sunday. 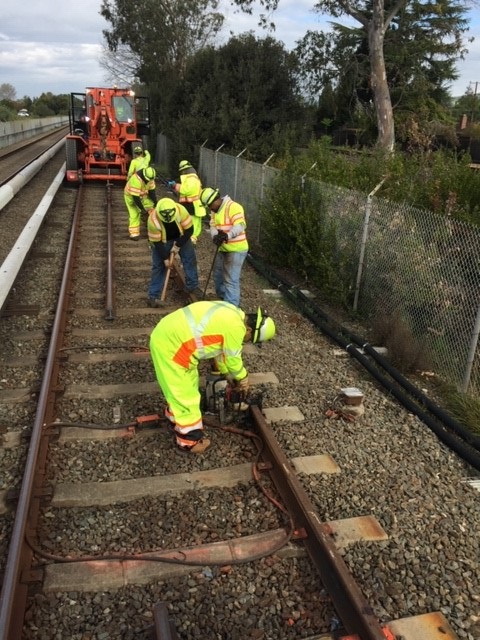 The photo below came from cable trough installation between Orinda and Lafayette held also on Sunday. 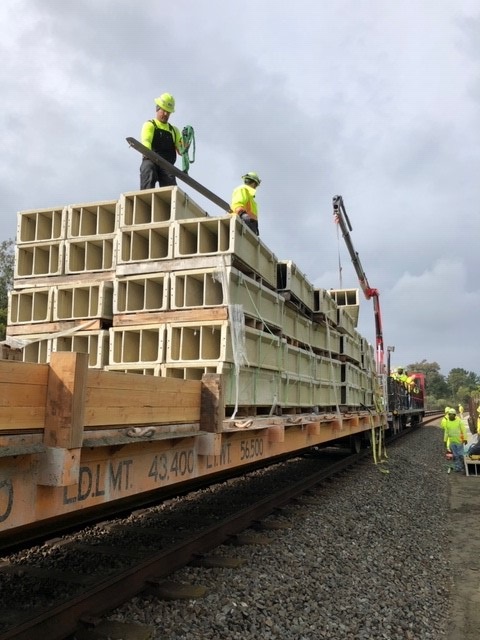 Feedback on social media to BART crews working on capital projects has been very positive.

"This is a damn smart use of available time with what resources you have," said one tweet. "After shelter-in-place, at least one piece of our critical infrastructure will be in better shape than we left it."

"The 1989 earthquake, the Great Recession, now this pandemic, BART has always been there to keep the Bay Area afloat," said another tweet. "Thanks BART and BART workers for everything. It’s not an exaggeration to say we would be nothing without all your work."

With a continuing shelter in place order in BART's service counties, BART has been preparing for operating revenue impacts. Estimated revenue impact projections for the full month of March is a loss of $24,660,000 with a loss of 5.88 million trips, according to a presentation to the BART Board in a special meeting last Thursday.

BART budget staff is waiting to find out how much money BART will receive from the federal stimulus package -- of which $25 billion was allocated for transit systems across the United States -- to help support our operating budget and running service. Approximately $1.3 billion provided to the MTC will be divided up among Bay Area transit operators, including BART.

For all updates on BART's efforts related to Coronavirus, please visit https://www.bart.gov/news/articles/2020/news20200225.