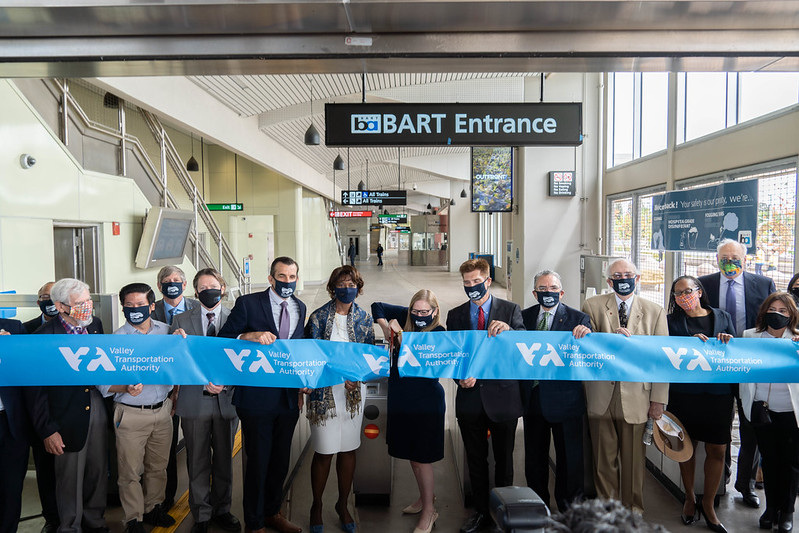 BART and VTA announced the Milpitas and Berryessa/North San Jose stations will open for service on June 13, 2020.

On Friday, June 12, a closed ribbon cutting ceremony was held for dignitares and news media at 10am. The event included an inaugural train ride on the extension. The public was invited to watch the event live and can now watch an archive on VTA’s YouTube channel at https://youtu.be/l0zQn44UWjU.

Riders can plan BART trips to Milpitas and Berryessa stations on the BART Trip Planner. PDF timetables of the new schedule has also been published on bart.gov/schedules/pdf.

Where is the Milpitas Station located?

Where is the Berryessa Station located?

What are the hours of operation?

With service reduced during shelter in place orders, the hours of operation are 5am-9pm on weekdays and 8am-9pm on weekends. You can now plan trips and see the schedule using the BART Trip Planner (select a date of June 13th or beyond). PDF timetables of the new schedule has also been published on bart.gov/schedules/pdf.

When will the first train arrive at each station?

When will the last train arrive at each station?

What will the fares be?

How do riders pay for the trip?

There are Clipper vending machines at Milpitas and Berryessa stations. The vending machines dispense Clipper cards only. There is a one-time $3 acquisition fee for the purchase of new Clipper cards.  There is no fee to add value to your Clipper card.  Paper tickets are not sold at the stations.  Learn more about Clipper at www.clippercard.com.  To get a Clipper discount card and receive the BART 50% discount for youth (age 5 to 18 years) or 62.5% discount for seniors (age 65 and over) you must submit an application. Learn more about how to get Clipper Discounts. Clipper Vending Machines take cash, debit and credit.
Add fare machines at the stations take cash only and give up to $4.95 in change. While BART is prioritizing Clipper usage at the stations, paper tickets can be used to enter and exit at Milpitas and Berryessa. Each station has one paper ticket vending machine available for customers who opt to purchase a paper ticket to validate parking.

How frequent will the service be?

With service reduced during the shelter in place order, trains will run every 30 minutes on weekdays, every 20 minutes on Saturdays and every 24 minutes on Sundays. BART will monitor ridership and could potentially go to 15 headways during peak periods based on demand.

How long will the trip take?

It will take about 60 minutes from Milpitas and 65 minutes from Berryessa/North San Jose to travel to San Francisco’s Embarcadero Station.

How many parking stalls are there and how many EV charging stations?

How do I pay for daily parking at the Milpitas and Berryessa Transit Centers?

The parking payment system for BART riders are different at Milpitas and Berryessa Transit Centers. There are three ways to pay for parking on a daily basis as detailed here:

What transit systems connect to the stations?

Will Fleet of the Future trains serve the station?

Yes, there are some Fleet of the Future trains serving the Green and Orange lines daily.

Do the stations have restrooms?

Yes, both stations have restrooms.

Do the stations have areas to secure bicycles?

Once you arrive at a Transit Center, you can either take your bike on BART or VTA or you can park. There are three ways to park your bike:

What is the relationship between VTA and BART when it comes to these stations?

VTA built and owns the extension and the two new transit centers, while BART operates and maintains the system.

What police agency will patrol the stations and parking lots?

BART Police is responsible for the safety and security within the BART station gates, on the platforms and in the trains. VTA will contract with a local law enforcement agency to maintain public safety and security outside the BART stations at the Milpitas and Berryessa Transit Centers. City streets in and around the transit centers are the responsibility of the police department of that city. All agencies conducted group exercises in summer 2019 to prepare for various scenarios and will continue to work together to ensure safety. Riders can use The BART Watch app to discreetly text police dispatch about illegal activity.

How was the project paid for?

Both General Managers signed the Project Safety and Security Certificate, the last project milestone before the system can begin serving passengers. They were joined at a signing ceremony by Santa Clara County Board of Supervisors President and VTA Board Chair Cindy Chavez, BART Board President Lateefah Simon, San Jose Mayor Sam Liccardo and Silicon Valley Leadership Group CEO Carl Guardino, among others.

“Efforts to bring BART service to Santa Clara County have been decades in the making,” said Senator Jim Beall, who was not present for the event but offered his congratulations on the major milestone. Beall secured billions of New Starts funding as a Metropolitan Transportation Commissioner and through several legislative bills he authored as the Chairman of the Transportation and Housing Committee. “The resulting mobility, environmental, and quality of life benefits of this 10-mile extension, and the next 6-mile phase underway, will serve us well into the next century.”

The certificate signed today documents that safety analyses and tests are completed, verified, and accepted that no safety hazards or vulnerabilities are known to exist that would prevent the Berryessa Extension from being utilized for passenger service.

On May 22, 2020, Powers will sign a Notice of Intent to Operate and present it along with the Safety and Security Certificate and documentation to the California Public Utilities Commission (CPUC), the regulatory agency for utilities in California. The CPUC has 14 days to approve the verification of safety and issue a letter paving the way for initiating passenger service on the 10-mile extension. BART and VTA have been working closely with the CPUC to ensure a successful review period and receive certification to operate.

Training of BART operators, engineers and other personnel to support the new extension of the system has been underway for several weeks. BART will deploy a new service schedule serving the two new stations prior to opening. The first train on June 13, 2020 serving the two new stations headed north will be a Richmond bound train and will depart the Berryessa/North San Jose station at 7:56am and will arrive at the Milpitas station just 3 minutes later at 7:59am.

“Expanding travel options in one of the Bay Area’s most congested corridors is key to an economic revival,” said Powers. “Connecting Silicon Valley to the rest of the Bay Area will not only beef up our public transportation network but create new opportunities for much-needed housing near transit.”

A pillar in the community who is known for his tenacious support could not have been happier to have been a part of today’s announcement. “We may be celebrating today; but what we are also celebrating are the two decades that made today possible,” said Silicon Valley Leadership Group (SVLG) CEO and California Transportation Commissioner Carl Guardino.

SVLG’s leadership and engagement resulted in three successful countywide transportation funding campaigns (2000, 2008 and 2016) and a nine-county funding campaign in 2018; not to mention serving as the private sector champion for $900 million in federal funds in 2012 and two rounds of state funds totaling an additional $1.3 billion (2011 and 2018.

"Without each of those significant building blocks, we would have never had the funding to build Phase I of the BART extension."

VTA broke ground on the $2.3 billion, 10-mile, two-station extension in April 2012. Two soon-to-be active BART Stations are the newest addition to VTA’s Transit Centers in Milpitas and San Jose which opened on December 28, 2019 along with the newly redesigned bus and light rail network to maximize connections to the regions rapid rail system. VTA’s new Line 500, which also goes live on June 13, will connect the Berryessa Transit Center to San Jose State University, Downtown San Jose and the Diridon Caltrain Station. Line 181 from Fremont will be discontinued when BART service begins.

BART opened for service in 1972 and with the opening of these two new stations will have 50 stations, 131 miles of track and will now serve five Bay Area Counties (Alameda, Contra Costa, San Francisco, San Mateo, and Santa Clara). BART’s average weekday ridership pre-COVID-19 was 408,000 trips.

Today’s joint announcement highlights the partnership responsible for delivering this long-awaited transit solution. VTA, the mobility manager for Santa Clara County and builder of the 10-mile extension, will own the extension including the two new transit centers. BART will operate the service and maintain the system.