Home | About | A History of BART: The Concept is Born

A History of BART: The Concept is Born 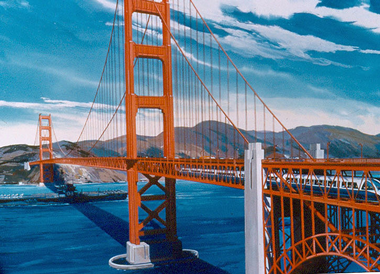 Artist's rendering of BART on the Golden Gate Bridge.

The following is a comprehensive narrative of the history of BART. You may also be interested in the book: BART the Dramatic History of the Bay Area Rapid Transit System written by retired BART spokesman Michael C. Healy and published by Heyday Books.

The BART Concept is Born

The BART story began in 1946. It began not by governmental fiat, but as a concept gradually evolving at informal gatherings of business and civic leaders on both sides of the San Francisco Bay. Facing a heavy post-war migration to the area and its consequent automobile boom, these people discussed ways of easing the mounting congestion that was clogging the bridges spanning the Bay. In 1947, a joint Army-Navy review Board concluded that another connecting link between San Francisco and Oakland would be needed in the years ahead to prevent intolerable congestion on the Bay Bridge. The link? An underwater tube devoted exclusively to high-speed electric trains.

Since 1911, visionaries had periodically brought up this Jules Verne concept. But now, pressure for a traffic solution increased with the population. In 1951, the State Legislature created the 26-member San Francisco Bay Area Rapid Transit Commission, comprised of representatives from each of the nine counties which touch the Bay. The Commission's charge was to study the Bay Area's long range transportation needs in the context of environmental problems and then recommend the best solution.

The Commission advised, in its final report in 1957, that any transportation plan must be coordinated with the area's total plan for future development. Since no development plan existed, the Commission prepared one itself. The result of their thoroughness is a master plan which did much to bring about coordinated planning in the Bay Area, and which was adopted a decade later by the Association of Bay Area Governments (ABAG).

The Commission's least-cost solution to traffic tie-ups was to recommend forming a five-county rapid transit district, whose mandate would be to build and operate a high-speed rapid rail network linking major commercial centers with suburban sub-centers.

The Commission stated that, "If the Bay Area is to be preserved as a fine place to live and work, a regional rapid transit system is essential to prevent total dependence on automobiles and freeways."

Thus was born the environmental concept underlying BART. Acting on the Commission's recommendations, in 1957, the Legislature formed the San Francisco Bay Area Rapid Transit District, comprising the five counties of Alameda, Contra Costa, Marin, San Francisco and San Mateo. At this time, the District was granted a taxing power of five cents per $100 of assessed valuation. It also had authority to levy property taxes to support a general obligation bond issue, if approved by District voters. The State Legislature lowered the requirement for voter approval from 66 percent to 60 percent.

Between 1957 and 1962, engineering plans were developed for a system that would usher in a new era in rapid transit. Electric trains would run on grade-separated right-of-ways, reaching maximum speeds of 75-80 mph, averaging perhaps 45 mph, including station stops. Advanced transit cars, with sophisticated suspensions, braking and propulsion systems, and luxurious interiors, would be strong competition to "King Car " in the Bay Area. Stations would be pleasant, conveniently located, and striking architectural enhancements to their respective on-line communities. 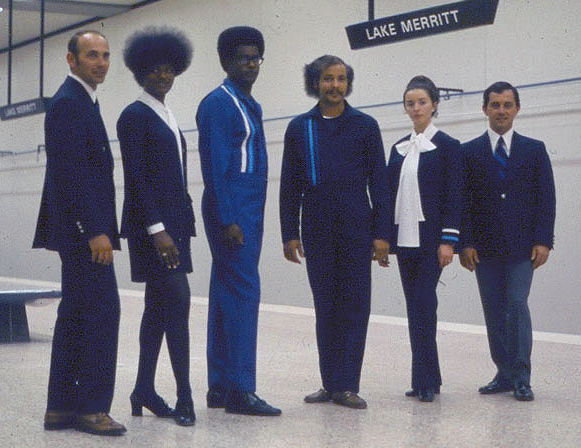 Hundreds of meetings were held in the District communities to encourage local citizen participation in the development of routes and station locations. By midsummer, 1961, the final plan was submitted to the supervisors of the five District counties for approval. San Mateo County Supervisors were cool to the plan. Citing the high costs of a new system-plus adequate existing service from Southern Pacific commuter trains - they voted to withdraw their county from the District in December 1961.

With the District-wide tax base thus weakened by the withdrawal of San Mateo County, Marin County was forced to withdraw in early 1962 because its marginal tax base could not adequately absorb its share of BART's projected cost. Another important factor in Marin's withdrawal was an engineering controversy over the feasibility of carrying trains across the Golden Gate Bridge.

BART had started with a 16-member governing Board of Directors apportioned on county population size: four from Alameda and San Francisco Counties, three from Contra Costa and San Mateo, and two from Marin. When the District was reduced to three counties, the Board was reduced to 11 members: four from San Francisco and Alameda, and three from Contra Costa. Subsequently, in 1965, the District's enabling legislation was changed to apportion the BART Board with four Directors from each county, thus giving Contra Costa its fourth member on a 12-person Board. Two directors from each county, hence forth, were appointed by the County Board of Supervisors. The other two directors were appointed by committees of mayors of each county (with the exception of the City and County of San Francisco, whose sole mayor made these appointments).

The five-county plan was quickly revised to a three-county plan emphasizing rapid transit between San Francisco and the East Bay cities and suburbs of Contra Costa and Alameda counties. The new plan, elaborately detailed and presented as the "BART Composite Report, " was approved by supervisors of the three counties in July 1962, and placed on the ballot for the following November general election.

The plan required approval of 60 percent of the District's voters. It narrowly passed with a 61.2 percent vote District-wide, much to the surprise of many political experts who were confident it would fail. Indeed, one influential executive was reported to have said: "If I'd known the damn thing would have passed, I'd never have supported it. "

The additional cost of the transbay tube -- estimated at $133 million -- was to come from bonds issued by the California Toll Bridge Authority and secured by future Bay Area Bridge revenues. The additional cost of rolling stock, estimated at $71 million, was to be funded primarily from bonds issued against future operating revenues. Thus, the total cost of the system, as of 1962, was projected at $996 million. It would be the largest single public works project ever undertaken in the U.S. by the local citizenry.

After the election, engineers immediately started work on the final system designs, only to be halted by a taxpayer's suit filed against the District a month later. The validity of the bond election, and the legality of the District itself, were challenged. While the court ruled in favor of the District on both counts, six months of litigation cost $12 million in construction delays. This would be the first of many delays from litigation and time-consuming negotiations involving 166 separate agreements reached with on-line cities, counties, and other special districts. The democratic processes of building a new transit system would prove to be major cost factors that, however necessary, were not foreseen.

Next: The Project Begins