In a series of ongoing improvements to the BART Police Department, one change of keen interest to the public has been an increased BART Police presence on trains.

That effort received a huge boost starting Jan. 10 when a new Critical Asset Patrol team began regular patrols of what’s known as BART’s Critical Asset Corridor -- generally the area through and around the Transbay Tube and the Berkeley Hills Tunnel. The Critical Asset Patrol team is funded by a renewable three-year federal grant from the Transportation Security Administration and Department of Homeland Security, because these key areas of the BART system are considered some of the most sensitive in terms of security. 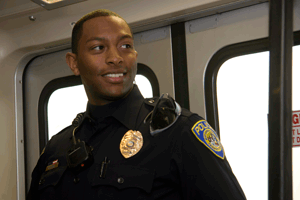 "The idea was to create a team of officers who would be riding trains, checking platforms, and be highly visible throughout BART's critical corridor,” said BART Police Sgt. Edgardo Alvarez, supervisor of the team, which has seven patrol officers. He explained that members of the Critical Asset Patrol team spend all their time on this specific assignment – unlike regular patrol officers, who have a broader range of duties.

"This team has a lot of flexibility and specialized training," Alvarez said. “The team’s primary responsibility is being visible within the critical corridor, so they can focus all of their attention to that task -- unlike a patrol officer who is in a patrol car, and is also responsible for the parking lots, radio calls, and so on. The Critical Asset Patrol team is responsible for being on trains."

A commonly asked question from the public is: "Why don't transit police officers always ride trains?"

The fact is, most crimes that occur within the BART system are not actually on trains, but more frequently in the stations, parking lots and nearby areas. (And, overall, crime rates are low – fewer than 2 crimes against persons per million trips in the most recent quarter for which statistics (.pdf) are available. )

That doesn't mean all BART Police officers shouldn't or don't patrol on trains -- they do (not only the new Critical Asset Patrol team), and are doing so even more, since an independent review of the department recommended increasing such visibility. Every officer now makes a minimum of two patrols on trains during his or her shift, often more. 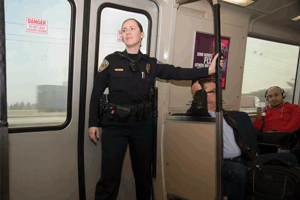 However, officers are also doing the important work of patrolling stations and parking lots and developing ties through community policing -- meeting people face-to-face, building connections that help to keep everyone safe. BART Police, as sworn California peace officers the same as any city's officers, provide mutual assistance to police in the localities BART serves. This can be vital in  crime-fighting efforts. One recent example: A BART officer patrolling in his car near Union City Station was flagged down by a group of citizens detaining a man accused of molesting a 2-year-old girl in a discount store near the station. City police credited the BART officer with a key role in making the arrest.

In addition, in order to respond promptly to reports of crimes, patrol cars give officers a speed and flexibility greater than they have on trains, when they are subject to the same routes and schedules as all the regular passengers on the train.

A recent day spent with BART Police Officer George Narcisse illustrated the wide range of activities handled by a regular patrol officer – and some of the challenges they face. Narcisse has been an officer since 2007, and was a train operator before that. His beat includes Fruitvale and Coliseum/Oakland Airport stations.

"These are all like little cities, all our neighborhoods," Narcisse explained, driving an observer around some of his typical patrols.  He went aisle by aisle down the levels of the parking structure at Fruitvale, looking for any signs of, and using his presence to deter, vehicle break-ins, one of the more common criminal activities.

He had started his day around 5 a.m. and had handled two calls by midmorning, one on fare evasion and one on a stolen license plate – both of which he was able to respond to with speed by having the flexibility of being in his vehicle. After things had quieted down a bit, he spent a part of his shift patrolling Fruitvale and Coliseum stations on foot and riding the train in between.
At Fruitvale, he noticed a man in a cowboy hat trying to “help” a rider with the ticket machine, in the process perhaps asking the rider for any spare change. It wasn’t obvious panhandling – but that’s a delicate issue, and one Narcisse handled with aplomb.

“Hi there, sir,” he said, approaching the man. “If someone’s having trouble you need to send them over there to the station agent. That’s their job to help people out with the machines,” Narcisse explained.  There was some friendly banter, sports, the weather, and then the man moved along.

“I will keep an eye out for him,” Narcisse said, because if the man interfered with customers again after that type of warning, it would signal more of a problem – instead, maybe the man really was just trying to help. Panhandling is an example of an issue that seems clear-cut and irksome to customers but can be complicated for law enforcement. According to the code enforced by BART officers “asking for alms” itself is not illegal, unless there is “accosting” involved, which is more subjective.

Narcisse says he welcomes the BART Police Department’s increased focus on community policing, because it comes natural to him – he grew up in the around around his beat. He obviously knows his “regulars” and they know him, building bonds that help with his policing.

The perimeter of Coliseum station is not the most scenic route to patrol on foot, but Narcisse is at ease greeting by name a young man walking his dog, then a woman dressed in tidy business clothes, who gives him a warm smile and a hearty, “Hi, George!”

“You’re looking good! You’re doing great!,” Narcisse encourages her, with an extra boost: “You know, even President Obama has had trouble quitting smoking. You can do it!”
Back on the train, riding back to Fruitvale Station, Narcisse walks the aisles from train car to train car, saying hello and giving riders advice. One woman is sitting in the seat right by the door, engrossed in typing on her laptop.

“Excuse me, m’am,” Narcisse says. “I just wanted to remind you to be careful with your laptop open sitting by the door. We see guys who will grab it from you and run just as the doors are closing so they can get away.” 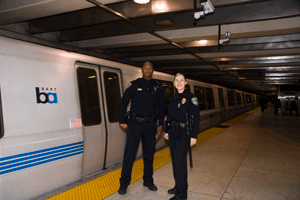 The officers at Embarcadero Station. Photo by Karen McDaniel

Later, in the patrol car driving back to headquarters, Narcisse visibly springs to attention, his posture straightening, stopping mid-sentence to flip on his siren, as a bright red Ford 150 pickup truck comes head-on toward his car going the wrong way down a one-way section of 14th Street. He pulls the driver over into a Burger King parking lot to run the license plate and registration – once again, it is important to remember that BART Police are sworn officers, able to deal with criminal activity in any area where they may spot it.

The truck driver’s papers are all in order and  there’s a profuse apology about being confused and turning the wrong way, full cooperation, so Narcisse gives a warning to be more careful and moves along.

“That could have turned into a different situation,” he said, noting another reason why BART Police can’t all be on trains all the time – it would limit the mobility, for example, if another officer needed to quickly come to assist should Narcisse have needed backup in making an arrest. “We have to have some flexibility to get around quickly and if you were on the train all the time, that would be more difficult,” he said. “We want to be on trains, too. We want to be everywhere.”

So there are multiple interests that must be balanced: having officers with vehicles on station patrols, where the majority of crimes occur, and where they have more flexibility and community connections; having officers on trains, important as a deterrent, and as a visible reminder to the public and potential criminals of the BART Police presence; having officers specially trained in anti-terrorism techniques in the critical corridor.

Sgt. Alvarez said the Critical Asset Patrol team will be a vital supplement to the overall force.

“They will be riding the trains during the commute hours and through the well-traveled areas of the BART system, seeing the same customers, station agents and train operators,” he said. Everyone “will get to recognize the Critical Asset Patrol team members because of the high frequency with which they will be on trains. This will help us to build bridges with the communities that we serve.”