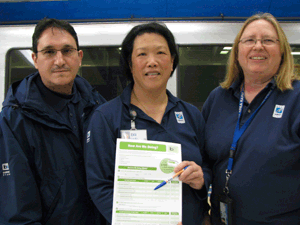 If you ride BART regularly, you’ve probably been on a train when a pair of BART survey-takers has walked through, offering a very short form to give your feedback on that day’s ride.

It’s called the “Passenger Environment Survey,” or PES (pronounced “PEZ,” like the candy dispenser) – and it’s a key way that BART collects information about trains, stations and personnel. The survey-takers go out in teams of two, riding trains randomly selected to ensure coverage of all lines at all times of day. The information you provide could make a real difference (in addition, you can get a chance to win free BART tickets).

“This survey is used to guide our decisions about not only what to do, but where to do it,” Kevin Fitzpatrick, research supervisor, said. “It allows us to track performance over time.”

Sometimes passengers ask the survey-takers why they can’t just go online and take it later. The answer is: This survey is about real-time data-gathering on THAT DAY’S RIDE – while it is fresh in your mind. It covers items such as the cleanliness of the station you entered on THAT DAY, the announcements you heard from the train operator THAT DAY, whether the temperature on the train was comfortable THAT DAY. The Passenger Environment Survey is not offered online.

With immediately collected data, the information can be correlated because the survey-takers have a record of where the surveys were given, so the information is much more precise and specific than a general survey where all of your recollections of different trips might blend together.

Survey-taker Eloy Burdett said most people can fill out the form quickly even on a short BART trip, because it is streamlined to a few key categories. “We tell people they can fill it out in just a couple of minutes,” he said.

About 6,000 forms are currently collected each quarter, and with greater awareness of the importance of the survey, it’s hoped that even more people will participate.

“We want to encourage people to fill out the survey,” survey-taker Ada King said. “We care about what they think.”

PES is the backbone of BART’s monitoring system for passenger environment. There is a different, more long-term survey of customer satisfaction done every two years, but PES is constant, ongoing, and regularly reported – you can see the data posted on BART’s website in a Quarterly Performance Report, which is also presented to the Board of Directors at their meetings. To see the latest report on data collected from the Passenger Environment Survey, go to www.bart.gov/reports and look for “Quarterly Performance Reports.”

You’ll see, for example, that in the most recent quarter for which data was reported (Q2 of Fiscal Year 2011, October – December 2010):

“This survey is important because it helps people throughout the BART system to know where to focus our efforts for improvement in the passenger environment,” Fitzpatrick said.  “We encourage everyone to take the survey to make your voice heard.”

Due to the randomly assigned nature of the survey routes, you cannot request to take the survey or know exactly when to expect it on your train. However, you can recognize the BART survey-takers from the BART jackets or shirts that they wear and their BART identification badges. You will see them in pairs, handing out paper surveys and collecting them on the spot from BART riders.

You can take the survey anonymously, but if you leave your contact info you can be entered for a chance at free tickets; two winners each quarter get $100 each in free tickets.

If the survey-takers come through your train, please take a moment to fill out the survey!