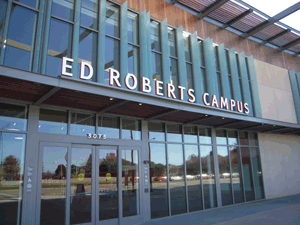 The Ed Roberts Campus, located directly above the Ashby BART Station, celebrates its grand opening on Saturday, April 9, after more than a decade in the making.

The campus is one of the world's best examples of universally accessible design -- a fitting landmark for the city of Berkeley, birthplace of the disability rights movement. Its namesake is the late Ed Roberts, a pioneer in advocacy for people with disabilities. The campus is home to seven partner organizations that provide a wide range of services, including the Center for Independent Living, founded in 1972.

BORN FROM A RADICAL CONCEPT

"The CIL is the world’s first independent living center, founded by students at UC-Berkeley and others in the community including Ed Roberts, as the first place where people with disabilities could get services and advocacy in a peer-based model," Yomi Wrong, executive director, said. "It was a very radical concept at the time, taking it out of the medical model, and really putting these services in the hands of the people that use them."

Other partner organizations brought together under one roof at the campus are Bay Area Outreach and Recreation Program; Center for Accessible Technology; Computer Technologies Program; Disability Rights Education and Defense Fund; Through the Looking Glass; and the World Institute on Disability.

“Being here at the Ed Roberts campus is going to really open up our services to a wider breadth of the community because we are so conveniently located here at a BART station," Wrong said. "Public transportation is one of the key components of a livable community for people with disabilities."

Peter Mendoza is a 25-year veteran BART rider and a program manager at CIL; part of his job is helping people with disabilities transition back to work.

“Public  transportation is really pivotal to anyone getting back to work," Mendoza said. "Part of getting a job is knowing you can get to the job. If  you can’t get to the work and get back home it’s a real barrier to employment for people with disabilities." 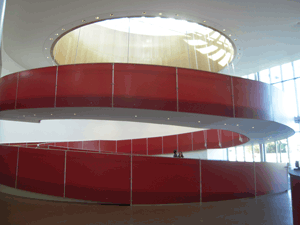 The spiral ramp is a focal point. Photo by Xuan Lam

Mendoza’s workstation is an example of accessible design – he has an adjustable desk to fit his wheelchair, and uses voice-activated software to compose his correspondence.

"People with disabilities are able to work. We just need support and accommodations to make that possible," he said. "One of the things that’s really neat about the Ed  Roberts Campus is that those things were taken into account when the building was designed, which is what Ed, who is the founder of the independent living and disability rights movement, wanted. That was his dream, for all of us to be able to work and live independently and have economic self-sufficiency and choices in our lives."

The focal point of the Ed Roberts Campus lobby is a huge spiral ramp wide enough to accommodate people on foot and in wheelchairs moving together side-by-side – giving them both equal access without the separation imposed by typical setups with stairs and ramps located together. The campus incorporates paths in its interior and exterior design with a different sand-blasted texture and color so the visually impaired can navigate more easily. Inside the lobby, a gurgling fountain provides an audible cue to where the water fountains and restrooms can be found. A special restroom feature is a sling-type lift device so some people with disabilities who would otherwise require help from an attendant can independently use the restroom, a basic need that many people take for granted.

INTEGRATION WITH THE COMMUNITY

Everything is designed with the needs of people with disabilities in mind, but also to integrate the campus with the broader community, Wrong said. For example, Through the Looking Glass runs an innovative Early Head Start program that serves children with disabilities as well as children without disabilities, but who have a person with a disability in their family.  One of the features of the Bay Area Outreach and Recreation Program is a fitness center that provides group exercise classes in a fully integrated environment, serving both people with and without disabilities. Among the classes are yoga, Pilates, and tai chi. 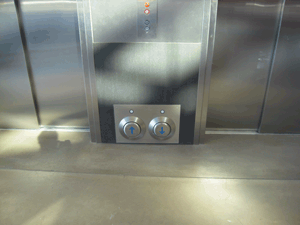 The campus is truly a tribute to the life and work of Ed Roberts, who died in 1995. Roberts described his vision for independence and accessibility in a 1981 speech, filmed courtesy of the Research and Training Center on Independent Living at the University of Kansas:

"When we help each other, when we model for each other, when we recognize that peer counseling, peer modeling, the kinds of things that we can do together, and the positive attitudes that we’ve developed ... that's the most important."  You can visit YouTube for the entire film clip. You can also find highlights from other speeches of Ed Roberts on the World Institute on Disability's website.

Wrong is hopeful people throughout the Bay Area -- and the world -- will come and check out the Ed Roberts Campus.

"Hop on  BART, get off at the Ashby BART Station and take the elevator up, they don’t even have to come outside on the street," she said. "And look around the building, go up this beautiful ramp, visit our center, visit any of the other partners that are here, and just see what we’re doing. It’s really exciting.”

BART website intern Xuan Lam contributed to the reporting for this story.