As a young law student, Mark P. Smith interned with the civilian oversight agency for the Los Angeles Police Department.

At that time, the LAPD was still reeling from the Rampart scandal, one of the most notorious cases of documented police misconduct in U.S. history. The oversight agency had to make sure LAPD lived up to the mandates of a consent decree so the besieged department could be turned around. The experience convinced Smith to stay in the field of law enforcement oversight after graduating from law school and passing the California Bar Examination.

"I am driven by a sense of fairness and equality," says Smith, now BART's first-ever Independent Police Auditor. "It troubles me when I see that missing. I thought this would be the most effective way for me to use my law degree." 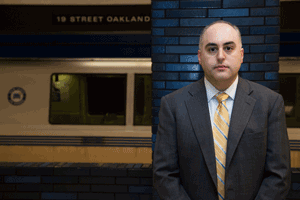 The public will have an opportunity to meet Smith and learn what his office does when he hosts a community forum on Tuesday, April 24, from 6:30 pm – 8 pm at Allen Temple Baptist Church in Oakland.

Since those early days after law school at UCLA, Smith has worked in police oversight agencies for two of America's largest cities -- first in Los Angeles, then in Chicago.

During those years, he had a hand in hundreds of investigations of all different types including officer-involved shootings, complaints alleging excess force, racial profiling, or matters as seemingly simple as citizens reporting that they felt disrespected by police. All citizen complaints deserve investigation, because public trust is the cornerstone of our system of justice, Smith says.

"The mission is to provide a service to anyone who feels they've been mistreated by police, or have witnessed police commit misconduct," Smith says about the role of law enforcement oversight in general. "Any law enforcement agency can benefit from oversight. It doesn't mean the agency is bad. Oversight can make a good agency better than it already is. We must hold our police to high standards."

Oversight can take many forms. Most forces, including BART Police, have their own Internal Affairs departments; BART also has a Citizen Review Board that operates in conjunction with Smith's office.

Most recently Smith was second-in-command of Chicago's police oversight agency, leading an office with around 50 investigators and 12 supervising investigators. On average, an individual is struck by an officer’s bullet once per week in that city, so there was plenty to investigate. There are more than 13,000 sworn officers.

Why, then, would he leave such a powerful position to become police auditor for a transit agency with only about 200 officers? When he arrived in July 2011, Smith had a staff of precisely one (himself), although now he has hired one investigator, and has an opening (currently unfilled) for an executive assistant.

While BART has had a comparatively low number of officer-involved shootings, Smith was aware when being hired of a particularly high-profile one: the Jan. 1, 2009, shooting death of Oscar Grant by a BART officer who subsequently resigned and was convicted of involuntary manslaughter. Smith says that because so many in the public were aggrieved by that case, it presented an important opportunity for rebuilding trust with the community. He did not shy away from the challenge.

BUILDING FROM THE GROUND UP AT BART

"In my other jobs I came into well-established agencies," he says. "This was an opportunity to shape and build from the ground up. I could use my knowledge from the larger agencies and tailor it to the needs here." A California native, Smith also had spent his undergraduate years at UC-Berkeley and was eager to get back to the Bay Area.  When not at work, some of Smith’s favorite pastimes are taking in documentary films and enjoying the panoramic views from the Berkeley Hills, two pursuits especially well suited to the culture and environment of the Bay Area.

Smith says one of the unique qualities of BART's police force is dealing with such a wide geographic area with so many different jurisdictions. "Officers must be familiar with the different rules and procedures for multiple counties, as well as with BART PD's own policies and procedures," Smith says. He is a strong advocate for training, and for recruiting and retention to keep the force fully staffed with quality officers. Understaffing of any force puts not only the public but also police officers at risk, he says.

Smith notes the importance of the fact that he does not report to BART Chief of Police Kenton Rainey; he was hired by and reports to the Board of Directors. That's where the "independent" in the title of his office comes in.

"I am independent from the BART Police," Smith says. "Not from BART as a whole. I work for BART. But if I need records, or request interviews, from the police, they are obligated to provide them."  He describes a good working relationship where he has been able to get information, and notes that BART Police have made many strides toward implementing the recommendations in a report from the National Organization of Black Law Enforcement Executives (NOBLE), that was undertaken after the Grant case.

“We have a duty and responsibility to establish and maintain a cooperative working relationship with the Office of the Independent Auditor,” Rainey said.  “We believe in transparency and will continue to welcome the positive changes that oversight is bringing.”

In his first year at the Office of the Independent Police Auditor, Smith has been getting up to speed, hiring staff, promoting the existence of the office. There has not been a glut of cases so far.  Perhaps the most dramatic was that of Charles Hill, who died in an officer-involved shooting at Civic Center Station on July 3, 2011, one week after Smith started his job. That case was more complicated than most, since the agency with lead jurisdiction was the San Francisco Police Department.  Smith gave a news conference one week after the shooting to assure the public he would provide thorough and independent oversight of the BART PD’s internal investigation. That investigation has not yet concluded.

The Hill case prompted much discussion about police contacts with homeless or mentally ill individuals; Smith says he is encouraged to see that Chief Rainey has made it one of his priorities to increase officer training in this area.

A former colleague of Smith’s says BART is lucky to have an auditor with his level of skill and determination. “Mark was one of the most thorough and thoughtful investigators I’ve ever come across,” says Brian Buchner, a special investigator with the LAPD oversight agency. Buchner, who is on the Board of Directors of the National Association for Civilian Oversight of Law Enforcement (NACOLE), stressed the importance of offices such as Smith’s. “More publicly accountable policing ultimately benefits a community because it has a view into what its police department is doing,” he said. “And it benefits the police department because with oversight it is able to police more effectively, which ultimately leads to a safer community.”

Smith will tell the community at the April 24 forum that his office provides just that kind of objective, independent, dogged service to the public. He has been visiting neighborhood groups, doing outreach meetings and trying to spread the word. It's not easy, on most subjects, to get people to give up an evening to come out to a public meeting. But for anyone interested in police oversight, or who has questions on how it works, this will be a perfect opportunity to engage one-on-one with the person in charge.

If you can't attend the meeting but want to learn more, go to www.bart.gov/policeauditor for more information or email oipa@bart.gov.