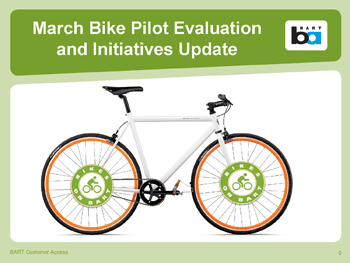 On Thursday, May 9, 2013, the BART Board of Directors will review passenger survey results from our most recent “Bikes on Board” pilot and compare them to our earlier test last year. Staff will provide an update on a series of initiatives aimed to improve bikes access on our trains and at our stations and offer observations and an evaluation of the pilot. Directors will then determine next steps. Download a summary of results of the latest survey (.pdf) and updates on initiatives for all the details.

“What better day to review survey results and consider next steps than on Bike to Work day,” BART Board President Tom Radulovich said. “Feedback from our riders suggests most of them are open to modifying bike rules to allow greater access. Even better, 25 percent of those surveyed said they are more likely to ride BART if we relaxed our bike policy. The bike pilot was another demonstration of how our passengers can adapt and self-regulate when crowding becomes a factor.”

The very latest pilot was a five-day test held March 18-22, 2013. Unlike the first bike pilot, which was conducted only on Fridays last August, this one provided a better picture as it included a full work week with higher average ridership (an increase of about 17,000 trips each day). Bikes were allowed on all trains at all times, but during peak commute hours (7:00 am to 9:00 am and 4:30 pm to 6:30 pm) bicyclists were not allowed to board the first three cars of any trains to provide options for those who wanted to avoid bikes altogether. Customer feedback was an important element of both bike pilots.

The pilot evaluation included observation by staff, members of the accessibility & bicycle task forces and the SF and East Bay Bike Coalitions. BART encouraged all riders to provide feedback and 2,153 people took the survey. To get a more scientific opinion from riders, BART conducted a random sample survey as well, which 1,720 riders participated in. Some key results from the random sample to be discussed at the Board meeting on May 9th include:

Most riders feel unaffected by the change

Fewer Riders Opposed to Bikes on Board

BART has been working on several initiatives to better accommodate bikes such as reconfiguring train car interiors to make more space for everyone, “bike waiting” zone decals at select stations with narrow platforms, expanding secure parking at BART stations, signage steering bikes away from escalators, a newly launched online/mobile train crowding feature as part of the QuickPlanner, and an upcoming bike etiquette poster campaign.

Directors will determine the next steps for the “Bikes on Board” pilot. Any modification to BART's Bike Rules will be made by the Board. The Board will hold its first night meeting of the year on May 23rd at 6:00 pm and a modification to the bike rules is likely to be on the agenda. The agenda will be released Friday, May 17th.