The Citizen Review Board that advises BART Police will continue considering a recommendation that BART PD adopt a policy for interactions with transgender people.

“Most law enforcement agencies still don’t have those kinds of policies in place,” said Harper Jean Tobin, policy director of the National Center for Transgender Equality in Washington, D.C. “In that sense BART is getting out ahead.”

“Adopting a policy isn’t going to eliminate problems overnight,” Tobin said. “But the larger changes that need to happen can’t happen without these kinds of actions.” 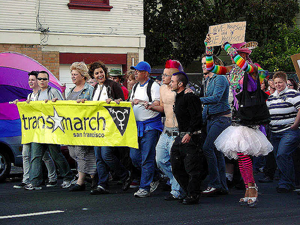 The Citizen Review Board, which can recommend changes to police policies, met Monday, Dec. 8,  tp discuss the draft policy.

The board formed a subcommittee that will work further on the draft proposal, in coordination with BART Police command staff and union representatives, for fine-tuning before taking action as a full board. Notice will be posted for any CRB action in the agendas section .

No specific problem or complaint spurred the action, said BART Independent Police Auditor Mark P. Smith. Rather, the idea to draft a policy came through work with the National Association for Civilian Oversight of Law Enforcement (NACOLE) and the Department of Justice's Community Relations Service, according to Smith and CRB Vice Chairman Les Mensinger.

"I was on this call concerning transgender people and some of their experiences, and I said, 'This is interesting. We live in a very diverse area, and these people go through such traumatic conditions, I thought, we should do something about this.’ “ Mensinger said.

Russell Bloom, Independent Police Investigator with the BART OIPA who researched the draft policy, said it is intended to be proactive.

"The transgender community is an important part of the fabric of the Bay Area, and we should be out in front on this issue,” he said.

Bloom said that in his research, he learned that often the simple act of asking how a person prefers to be addressed fosters respect and good will.

What might seem, to some, to be awkward at first -- asking, "How would you prefer that I address you?", when used to using a habitual "Sir" Or "Miss", -- can be an important teaching moment, Bloom said.

"It creates an opportunity for officers to become comfortable asking that type of question, and having an open and honest conversation may help make the transgender people they serve feel they are a respected part of the community,” he said.

“The opportunity to answer the question is an important aspect of the interaction, and far better than feeling disrespected or disregarded or having assumptions made," he said.

The draft policy also would change BART Police Department recordkeeping to make forms broad enough to include transgender identity. While federal data, such as Uniform Crime Reporting statistics, may not include such options yet, this could possibly influence society in a larger way.

"If there are insufficient data to analyze the ways this particular segment of the population is being policed, and if we can change that on a local level, eventually it could" lead to such recordkeeping on a larger scale, Bloom said.

Awareness of and treatment of transgender people has been a growing concern  in the country, and the Bay Area with its reputation for openness and  acceptance tends to be ahead of the national curve, experts say. The annual Trans March as part of San Francisco's Pride celebration is one of the world's largest transgender-focused events.

“For example, for some trans women of color, it is just assumed that they are going to have drugs or be doing sex work or something else illegal,” Tobin said. “There’s a dynamic that can come up with transgender people where officers who may not have much experience interacting with them feel a fear, or discomfort, or suspicion.”

The policy recommendation is meant to afford fairness and dignity, and not to interfere in any way with upholding the law, Smith and others said.

Many officers “just want to know, ‘What do I do, so I can do my job right?’ , “ Tobin said. “Their job is dangerous, and officers want rules they can understand … It’s part of a long-haul cultural change.”

For example, if someone’s legal name on an identification document such as a driver's license is not the same as the name or gender identity they prefer, a warrant check could be made on the legal name, but the person could still be addressed by their preferred gender identity and pronoun.

In addition, when interactions occur in a group setting, the recommendation is to allow the transgender person to provide their legal identity in a separate setting apart from others in the group, to avoid "outing" them against their wishes.

The policy recommendation extends to items such as how one is treated when  wearing prosthetics, wigs, and makeup, and when those items may or may not be required to be removed; and making sure detained transgender persons have access to medical attention or medications, including hormone therapy, with the same urgency and respect as medical issues for other detained persons.

The recommendation does not deal extensively with issues of housing suspects, or how they are accommodated long-term, because BART Police generally remove suspects to facilities in the jurisdiction where issues occur, which have their own policies.

"We are grateful to the BART employees who are working so hard to make this policy a reality. With transgender people facing high rates of harassment and violence, it is good to know the BART Police Department is considering this policy to ensure transgender people are treated with respect,” said Masen Davis, Executive Director of the Transgender Law Center.

Whenever a final policy recommendation is approved by the CRB, the recommendation would go back to BART Police, pending a decision by BART Police Chief Kenton Rainey on whether it becomes an official BPD policy, said Lt. Ed Alvarez, the Support Services Lieutenant in charge of policies.

"We have been collaborating with the Citizen Review Board and Office of the Independent Police Auditor on their draft and welcome the chance to look at this important issue," Chief Rainey said.  "Our officer training is constantly evolving and improving, and developing a policy around interactions with transgender individuals makes sense for the diverse community we serve. We thank everyone who worked on this, including all the stakeholder organizations, and will give it close consideration to make sure we are respecting the dignity of all while upholding public safety, which are goals that can and should coexist."

The classification of people as male or female.

Gender Identity:
One's internal, deeply held sense of one's gender. Unlike gender expression (see below) gender identity is not visible to others.

Describes a person's enduring physical, romantic and/or emotional attraction to another person. Gender identity and sexual orientation are not the same.

An umbrella term for people whose gender identity and/or gender expression differs from what is typically associated with the sex they were assigned at birth. People under the transgender umbrella may describe themselves using one or more of a wide variety of terms, including transgender.