Human trafficking: It’s in our communities, and BART aims to be part of the solution

Human trafficking: It’s in our communities, and BART aims to be part of the solution

The girl was a 13-year-old cheerleader in Oakland, the 38-year-old man called her his girlfriend, and he bought her ice cream between the sex acts she did with strangers for $40 apiece.

BART Police Lt. Ed Alvarez helped get the conviction that sent that man to prison, and he’s a vocal advocate to raise awareness of human trafficking.

The BART Police Department is part of a regional effort  to fight trafficking, recognizing that public transportation, as part of our communities, sees the same types of activities that occur in those communities. The San Francisco Bay Area is one of the FBI’s top 13 hot spots in the nation for child sex trafficking, according to a 2009 FBI report.

BART has a two-pronged approach: training patrol officers to understand the cues and techniques in human trafficking, and also reminding the riding public of resources available, and the need to help with “see something, say something” awareness.

“Whatever's going on in a community is going on in its transit system,” BART Police Chief Kenton Rainey said, citing his emphasis on a community-oriented policing and problem-solving philosophy (COPPS).  “It's incumbent upon everyone in the transit system to be vigilant in the protection of our daughters and sisters from these predators.”

The problem became vivid in a recent ride-along and walk-along with two officers who patrol areas that are key zones for trafficking, a broad category of crime that often manifests locally as the commercial sexual exploitation of minors. Far from the myth of “victimless” crimes, vunlnerable victims are lured by older adults who direct their activities which, due to the youths not having cars, often involve BART and other public transportation to move victims around frequently to avoid detection.

Officer Russell Medeiros (below) and Officer Jimmy Chung patrol primarily in BART’s Zone 1 and Zone 4, which include downtown Oakland and downtown San Francisco. They and other BART Police officers go through training to be alert to the dynamics of trafficking. 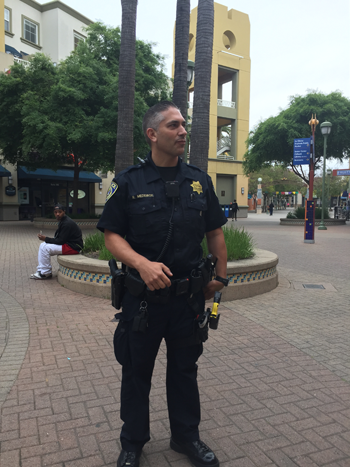 Driving down International Boulevard in Oakland, the officers pointed out things they watch for on their patrols: a young woman walking along the street without purpose, loitering, or flagging down cars, who may have no ID if contacted, because the people who control her activities keep her ID. It is often not the crude stereotype of a woman in spike heels and mini-skirt; it may be a middle-schooler  in a sweatshirt with her school logo.

“These girls are brainwashed that this person is going to take care of them,” Medeiros said. (While males are also victims of trafficking, locally officers encounter females more often as the victims.) “They’re providing them food, shelter, and also keeping their identification and money. They’re convinced this person is looking out for them, and they’ll take the abuse and the threats.”

With newer girls, the traffickers will stay close by to keep an eye on “their property,” so officers look for eye contact or hand signals between a girl walking the street and an older man sitting at a nearby bus stop.  “It all goes back to being aware and understanding of what could be a pimping and pandering situation,” Chung said. “You have to identify the problem and know all the ways to approach it.”

Chief Rainey noted that under the state law BART sought for prohibition orders, the law that lets serious and repeat offenders be barred from BART, the largest single category of prohibition orders issued was for domestic violence.  In domestic violence calls, officers are trained to separate the parties and use a line of questioning that does not blame or accuse the victimized party. “What appears to be a boyfriend and girlfriend arguing, might not be,” Chung said.

The officers said public transportation offers a way for traffickers to blend in with a large group of people, as opposed to walking side-by-side with a young victim, where they would more easily draw the attention of police.

Police training is one key area of focus.

“This is a really important issue because a lot of times you’ll get that call, a runaway call, a DV (domestic call), and you just sense that something is not right,” BART Training Sgt. Carolyn Perea said. “Officers need to know how to ask the right questions.”

In the case Alvarez broke, he won the young victim’s trust, and she told him she was afraid for her life. “She did it out of fear that he was going to kill her,” he wrote in documentation of the case at the time. The man ruled over multiple young girls by threats and violence and sometimes took them on BART to their “work,” before dropping them back off at their schools in the afternoon.

Mary Kuhn is a spokeswoman for Catholic Charities of the East Bay, which works in coordination with other agencies and is planning to locate a teen safe house in Alameda or Contra Costa County this year or next. The location is not identified publicly to protect the teens.

“This is a big issue that has to be addressed regionally, and a huge transportation system like BART has to be part of the solution,” Kuhn said.

Human trafficking is a growing local and national issue and the state law covering it (Penal Code Section 236-237) offers officers many lines of pursuit, Alvarez said, with enhancements for longer sentences when things like a weapon are involved.

With major events such as the Super Bowl hosted locally last January, or sports playoffs or championship series, additional victims are brought in through local airports, and BART serves both SFO and Oakland airports, the officers said. They said traffickers also rotate in victims from other areas of California such as Sacramento or Stockton, who might arrive via public transportation to end-of-line stations.

“The one conviction I did get, that made me feel good,” Medeiros said. He was working a bicycle patrol at the time, stopped a girl loitering on the street flagging down cars, and it turned out her trafficker was directly across the street and he ended up being arrested and convicted.

So, the issue is not hopeless. Every BART rider can help by being aware of suspicious activity and advising BART Police at 877.679.7000 of what they have seen. They can also use the BART Watch app to report possible criminal activity.

The poster below lists the national hotline to call if a person is a victim or wants to report a situation, and some tips on what to look for.  It can be found also in all BART stations, helping to spread awareness there, too. 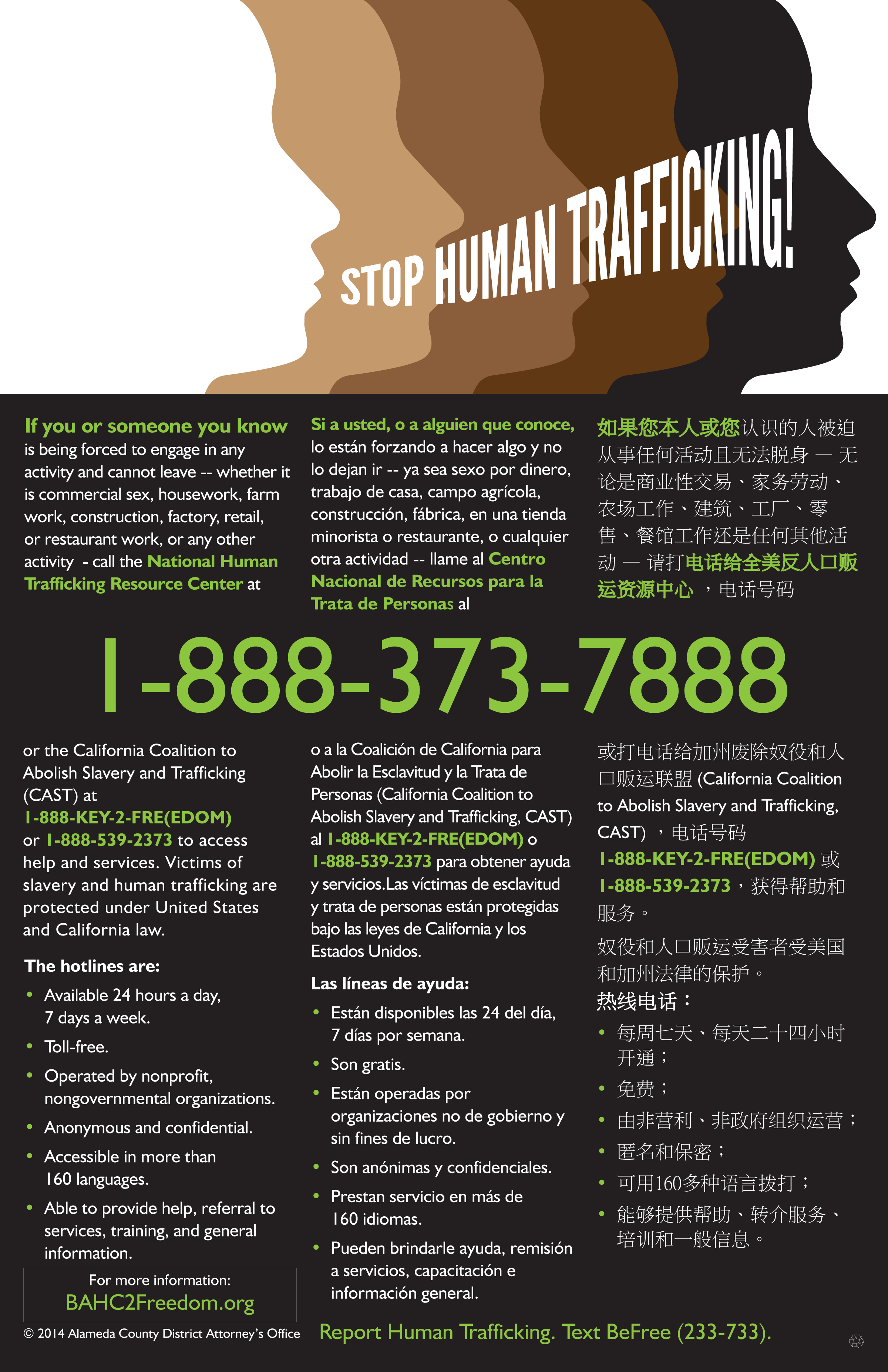