With solar power and more, Warm Springs may be BART's greenest station yet

With solar power and more, Warm Springs may be BART's greenest station yet 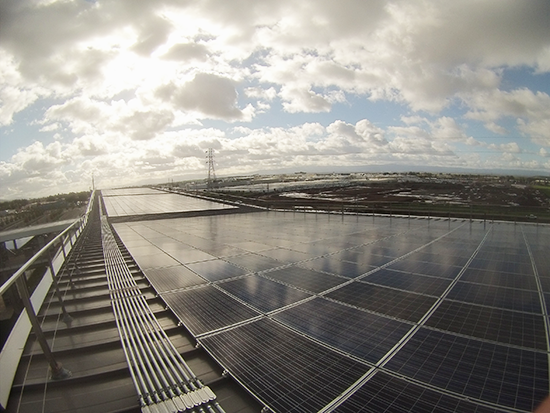 Solar panels atop the concourse roof and parking areas provide power to the station.

What does it take to construct a state-of-the-art, environmentally sustainable train station?

It was a long road to the March 25 grand opening, but BART, with its new Warm Springs/South Fremont Station, has done just that with a simple strategy: to “bake in” features that are best-practice for the environment from the very beginning.

“This project is quite a personal endeavor for our team,” said Paul Medved, Group and Project Manager for Warm Springs since 2000.  “A mentality of sustainability is part of a culture that doesn’t just happen on its own.”

Warm Springs challenges the environmental impacts of traditional building styles and looks at energy efficiency, runoff water retention, effects on wildlife, and other environmental aspects in a whole new way.

The station’s spectacular visual aesthetic and artistic integration of color that changes with the rising and setting sun draw attention to the natural beauty of the area. (View a video about the artist who created the public art here)

An open-concept design showcases Bay views to the West and undulating hills to the East. The hills are a green contrast to the blue sky in the rainy winter; the sun is strong in the spring and summer; and Bay breezes blow the wildflowers in the fall. 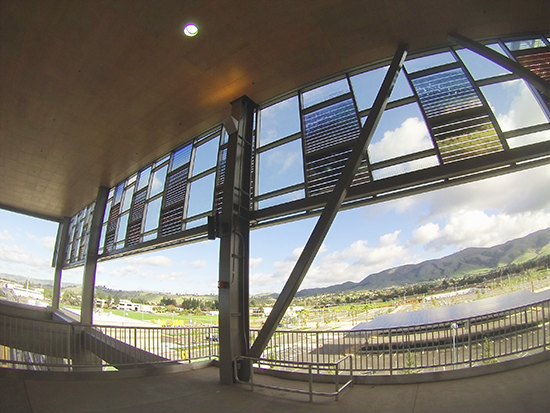 But the station has more than a pretty face. Its entire building process has been guided by principles of sustainable and accessible, human-centered design.

In rainy seasons, the sweeping vistas at Warm Springs turn from dry brown to luscious green. Without the right ratio of permeable to non-permeable surfaces (landscape to hardscape), drainage can be a problem.

Warm Springs has features known as bioswales with native and drought-tolerant landscaping surrounding the 2,000-space parking lot with native Juncus shade grass under solar canopies. The main grand bioswale provides a lush bed of sun-loving fescue grasses beside where buses come in and out of the station.

These grasses, pebbles, shrubs and swan hill olive trees soak up and filter water, as part of a drainage system that could otherwise intrude into car, bike, and bus paths, while also removing pollutants that the rain can carry into the Bay. The plants require minimal watering in the summertime since they are adjusted to the local climate. 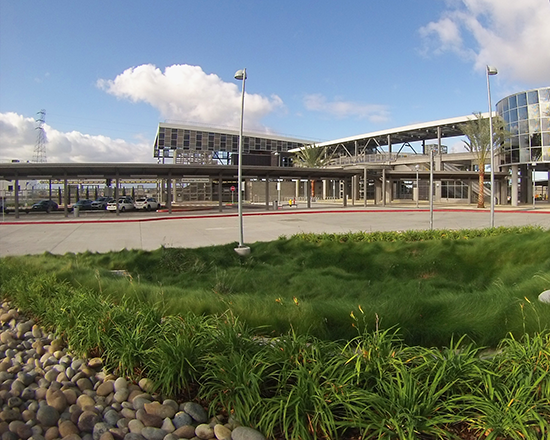 The grasses and pebbles of bioswales will help filter pollutants and regulate drainage.

As another conservation component, water filtered through the bioswales is re-routed into an underground surge basin bigger than an Olympic swimming pool -- a staggering scene shown off on a tour from engineers as the station was under construction.  Here, the water can be recirculated for other uses, or discharged slowly and gradually to prevent overwhelming drainage areas.

(Find out more about our systemwide efforts to prevent storm water pollution here.)

An earlier view of the surge basin under construction; it will hold captured rainwater.

While you are on the upper level of the station, especially in the summer, you might also notice one of the most prominent sustainable features of the station: its harnessing and use of solar energy.

Helping to drive these advances was that personal connection that Medved spoke of; that key team members had the quest for sustainability “burned into our heads,” he said.

As part of an ongoing sustainability effort, the station will also provide 42 charging stations for electric vehicles, paid for in part by a grant from the Bay Area Air Quality Management District.  (Charging stations will open in the next few weeks).

For David Silva, Principal Engineer overseeing construction on-site, the motivation goes back to growing up in Fremont. “I remember seeing the map with the ‘dot-dot-dot’ going South when I was very young, so I was thrilled when I got to work on this project. I remember looking out when it was all just gladiola fields, and my Dad telling me, ‘This is all going to change some day.

That day is here. “This project is going to reshape the city of Fremont, to a more pedestrian- and bike-friendly environment,” Medved said. To the West lies land that will boost the Warm Springs Innovation District, with new housing, including affordable units, and incubator-type business hubs. A boardwalk will lead from the station through what is expected to be a vibrant and thriving live-work community. 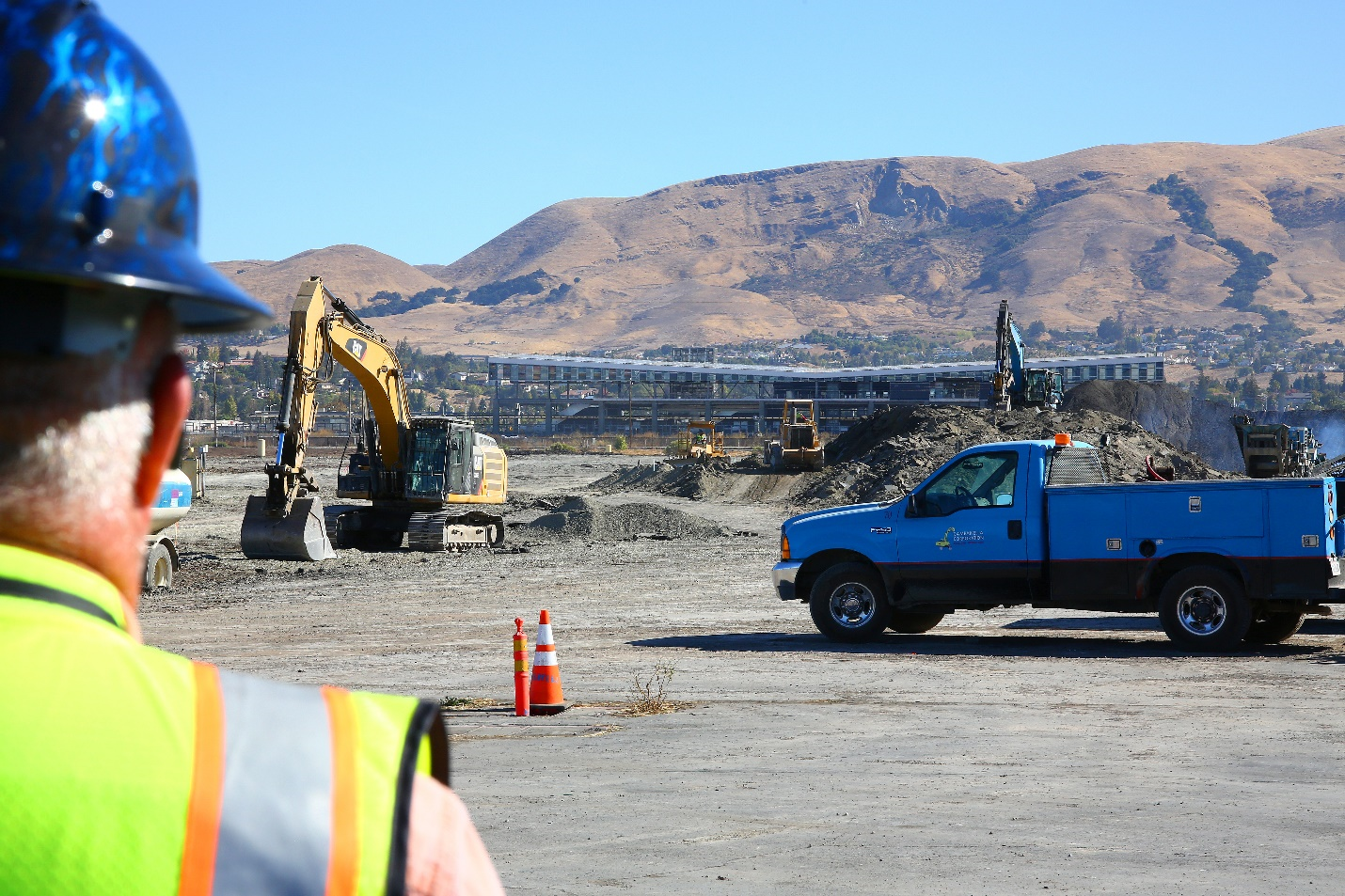 The West side of the station will add businesses and housing to a thriving Innovation District.

“From the design phase to the construction phase to the operations and maintenance phase, we have tried to give everything a chance, and we succeeded on a bunch of it,” Medved said.

Thomas Blalock, the BART director whose district includes Warm Springs, has been another advocate for creating a sustainable station that sets a gold standard for environmental features.

“This means a lot to me,” said Blalock, who spent 35 years working for the city of Fremont as a civil engineer and was the city's public works director.  “Environmental protection was built into the project, and will continue with studies and reports on into the future to show that what we did really worked, and to measure the success.”

Blalock, pictured below gesturing during his speech at the ceremony (Photo by Noah Berger). cited a phrase attributed to the original Native American inhabitants of the region, in the pledge to “walk lightly on the land.” 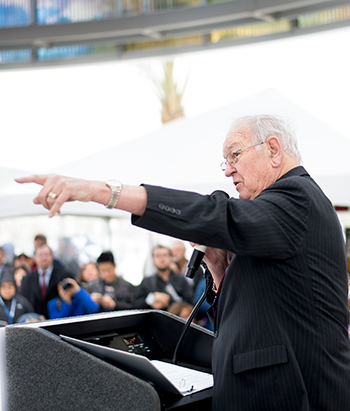 “In my youth this whole area was farms and truck gardens,” he said. “Over the years, as much of that land was paved over, there was a lot more runoff, because the land wasn’t there to absorb the water in the rainy season."

This station was built with a huge surge basin, so that it takes storm surge and as soon as it starts running in, it starts to be diverted out through a smaller pipe size, so it doesn’t overwhelm the system.”

Blalock also notes the “never-mow” grass, its growth controlled naturally; the bioswales to help filter runoff; the large, clear, green bicycle paths and secure bike parking; the photovoltaic panels to power the station and EV charging stations -- apropos for a station in the shadow of the Tesla headquarters.

The environmental features and other innovations of the new station were shown off to the public at the opening ceremony on large display boards (download the PDF file) outlining various aspects in more detail.

Getting to this point was not without many hurdles along the way.

Construction of the subway portion under Lake Elizabeth was one of the greatest challenges. “We were besieged by nesting birds” from the Pacific Flyway, Medved said. A perimeter was set up so that the birds would not be disturbed, with a nearly obsessive attention to their presence. When a bird was in the wheelwell of a truck, the truck did not move until the bird did. Workers were schooled in the Migratory Bird Act and other matters concerning wildlife.

Station access is another issue that was carefully thought through from the very beginning.

“Access is huge, and historically, transit systems have not always done it right,” Medved said.

At Warm Springs, there is true multimodal access -- not just a drive-up lane stuck on the side. There is a pattern for safe and orderly flow of pedestrians, bicycles, buses, clearly marked features for people with disabilities, such as centrally located sets of elevators, and much more.

The station has wide, green lanes for bicycles only that lead to parking in electronic lockers or on racks on the bottom level.  There are also racks to secure bicycles on the upper level of the station. 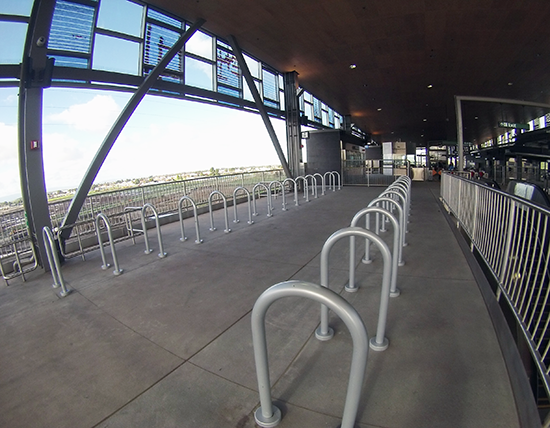 There are bike racks on the upper level as well as e-lockers for bikes on the ground level.

Reusing resources was another key principle.

Recycled tire aggregate (TDA) is a process in which used tires are ground up and used as a shock absorber for the train tracks, which diverted 130,000 used tires from the landfill and were able to be used to reduce track vibration.

An ambitious Warm Springs Opportunities Report published in 2010 listed dozens of categories where environmentally sustainable practices could be used, along with their benefits, and a matrix to keep track of the status. One of the opportunities was using the station design “to inform the public of a valuable lesson in environmental stewardship provided by the history of Warm Springs.

The report continued: “The abundant hot springs that gave the place its name spawned a popular resort in the mid-19th century. When the aquifers in the area that also supported vast wheat fields after the Gold Rush were exploited and depleted in the 1920s, there was massive unemployment, bankruptcies and dislocation. The station design should make use of this historic calamity to educate the public about the importance of sound environmental management.”

To that end, another of the station’s features will be interpretive signage such as the graphic below pointing out sustainability features for all to see as they use the station. 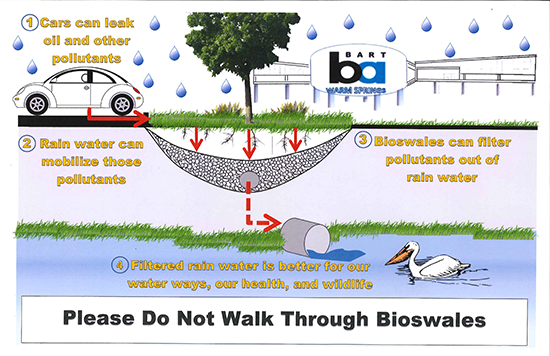 “Another dimension to sustainability is sharing and passing on what has been successful,” Medved said. “The most important thing was embedding sustainability in our mentality from the beginning. If you can accomplish that, the rest is just a bunch of details.”

PART OF A BIGGER VISION

BART’s Sustainability Group Manager, Holly Gordon, who has been a driver behind the scenes in the process to transition BART to cleaner and more renewable energy sources, provides her perspective on the solar efforts of the Warm Springs station in the podcast “Hidden Tracks: Stories from BART” (Listen to the podcast here.)

“There are progressive-minded people who work here and they really want to make a difference and put a stake in the ground for transit agencies.," she said.

So many people over so many years have worked to make the Warm Springs / South Fremont Station a complement to its environment, rather than a detraction; which recalls the famous quote from The Lorax warning about the dedication it takes to save a precious setting:

"Unless someone like you cares a whole awful lot, nothing is going to get better. It's not."

Warm Springs is a testament to all of those who cared a whole awful lot -- and will continue to for generations to come.

A video from the station's public opening ceremony on March 4 can be found here.