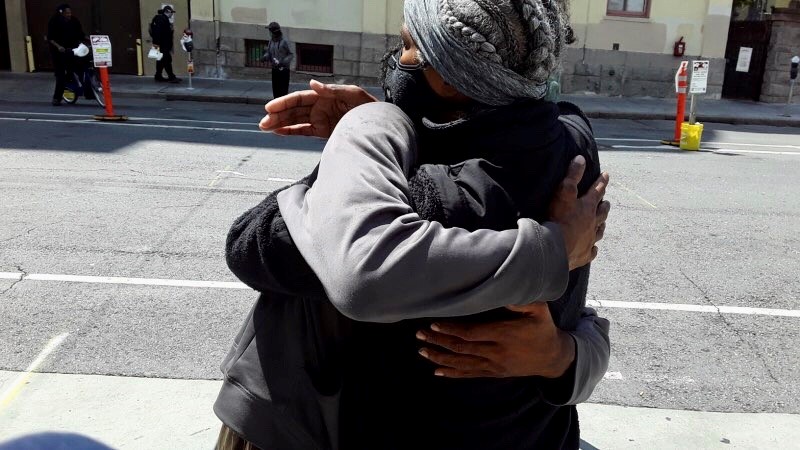 Sonja Hagins Perry hugs her son after they were reunited in San Francisco; Photo by Duane A. Hagins, Perry’s brother

Sonja Hagins Perry never gave up on her son, her firstborn, her boy who loved music, art, being a big brother.

Perry, who did tours of Afghanistan, the Kyrgyz Republic, Turkey, and Qatar over 21 years of U.S. Air Force service, is no stranger to trauma and stress. But nothing prepared her for what happened earlier this month, when she was finally reunited with her son.

For the past several years, T.A.E. (his mother requested he be identified by his initials only) had lived on the streets in San Francisco, taking shelter in BART stations where he frequently engaged with BART PD’s crisis intervention officers and homeless outreach specialists.

T.A.E., 30, became homeless after episodes of psychosis as a young adult, his mother said, which ultimately led to a diagnosis of schizophrenia. Perry said she is talking about her son’s mental health issues with his permission as part of his treatment and recovery and to give hope to others in her situation.

“Periodically he would reach out and call me,” said Perry, who moved from Northern California where she was stationed at Travis Air Force Base to San Antonio, Texas, about a decade ago. “Anytime I saw a 415 area code, I knew it was him." T.A.E. gave his mother the phone number for Armando Sandoval , BART's Crisis Intervention Training Coordinator and Community Outreach Liaison. "Armando started calling me," she said. "He was my guardian angel.”

Sandoval helped Perry with resources so she could better advocate for her son. She studied up on the law, on treatments and medications, on paperwork and forms, on techniques to deescalate a crisis. And she asked for help from a higher power, relying on her faith.

“Every Wednesday, I had an alarm on my phone set for a certain time, and I set aside that time to pray for him. I searched the internet for his name. I said, ‘Please, God, don’t let this year end without me knowing if my son is alive or dead.’ ''

In mid-July, after contacts from Sandoval and BPD Officers Eric Hofstein and Nicholas Luzano, Perry had a call from her son and felt her prayer had been answered. Not only was T.A.E. alive, he was in a period of lucidity where he was receptive to begin treatment and recovery.

“He was ready to get better,” Perry said. She packed a bag with clean clothes and toiletries for T.A.E., enlisted her brother to help, and flew from San Antonio to the Bay Area, where the first stop was the BART PD office at Powell Street Station to patch together the pieces of her son’s life.

Until then, it had been so painful to talk about, that Perry had shielded her two daughters from news about T.A.E. “They knew how hard it was on me, and we never talked about him, because I would get teary and cry. I didn’t want to put that burden on them.”

T.A.E.’s contacts with BART PD were mainly for low-level infractions like fare evading, but he was enough of a “regular” to have been on the radar of BART PD’s crisis-intervention staff and of partners contracted with the SF Homeless Outreach Team, including SFHOT's Jessie Jones. BART's Fiscal Year 2021 budget will include an additional community outreach specialist and continued emphasis on connecting people in crisis with services.

Officer Hofstein gave Perry vital advice on interacting with her son, to keep a low-key approach, not to be overly excited, and to expect that he might be wary. Symptoms of schizophrenia can include hallucinations, delusions and disorganized thinking. 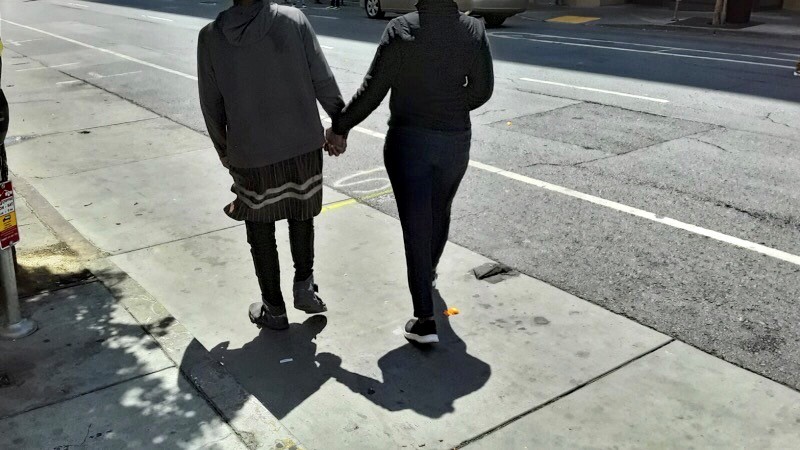 Perry and her son hold hands as they walk together after being reunited in San Francisco; Photo by Duane A. Hagins, Perry’s brother

Sandoval and the officers helped Perry to check for her son around the downtown San Francisco BART stations and at community-based organizations and churches in the area that offer free meals to those in need.

“I was getting a little discouraged,” Perry said, as expenses mounted with no sign of her son.

One morning she went over to the St. Anthony’s Dining Room, which is serving grab-and-go instead of sit-down meals due to COVID-19. “It was bittersweet,” she said of the moment she saw her son there. “I knew it was him immediately. And he had no idea who we were. He said, ‘Do you know me?’ It broke my heart.”

Perry and T.A.E. got home to San Antonio just this week, on Tuesday. He had a joyful reunion with his sisters, got to know his stepfather and asked his mom if she would cut his hair (see text exchange that Perry sent to her BART contacts; Photo by her husband, Anthony D. Perry) 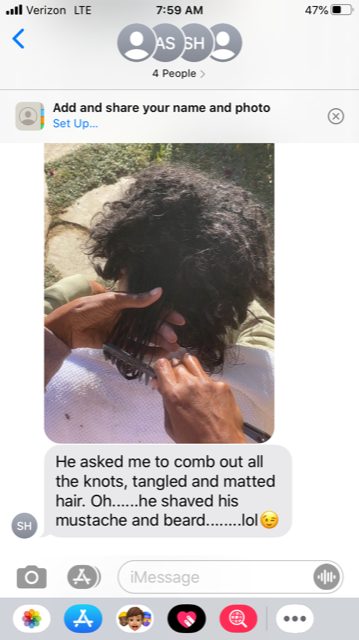 They’ve joined NAMI, the National Alliance for Mental Health, and T.A.E. is taking his medications and arranging for therapy, Perry said.

“We’re still learning,” she said. “I’m trying to keep things stable and calm for him. He remembers some things. Like, I never got rid of his car (a 2008 Toyota Corolla), and he remembers that. I’m trying to meet him where he’s at right now, not where he’s been. It’s heart-wrenching, but he’s a survivor.”

Perry asked T.A.E. if he wanted to share some words for this article; he needed a little time to collect his thoughts then wrote in a text:  “It’s about family. That’s all that matters. The BART Police treated me like family. I’m thankful and happy to be reunited with my family.”

Perry began journaling when she first lost her son to mental illness and homelessness. She titled her journal “Unwavering Love” – a love she has extended to the people who helped her son.

“They took my text messages, my phone calls. They made me feel like T.A.E.’s was the only case they were working on, even though I know they were very busy,” she said. “He wasn’t just another number, they treated him like a person. Police officers as a whole get a bad rap but for these individuals from BART, I just can’t thank them enough.”

THE ONLY CONNECTION TO MY CHILD

“They were the only connection I had to my child,” she said. “Knowing he was OK, just knowing if he was dead or alive, knowing anything about him, that’s the only way I could sleep at night. God prevailed, at every step along the way.”