Denser filters have been added on all train cars

Denser filters have been added on all train cars 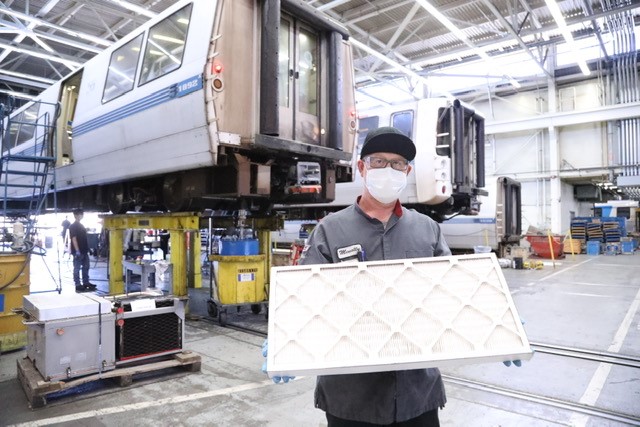 After a successful pilot, BART installed MERV 14 filters throughout its fleet of train cars in 2021 as part of a multilayered plan for stepped-up system safety as the pandemic plays out.

Air filtration has an important role in preventing transmission of the coronavirus, along with vigilant mask-wearing. BART's heating, ventilation and air conditioning (HVAC) systems are extremely robust already, with air in a train car being replaced about every 70 seconds. Air filters are rated by their ability to block different-sized particles, a rating known as their minimum efficiency reporting value, or MERV, on a scale from 1 to 20. 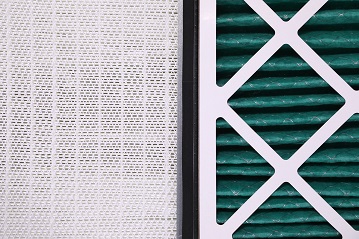 The old MERV-8 filters could trap particles between 3 and 10 microns in size; the new MERV-14’s can capture much smaller particles between .3 and 1 microns. BART engineers sent the pilot filters out for pressure-drop testing to measure their effectiveness. The EPA indicates a filter rating of MERV-13 or higher will filter out virus particles like coronavirus.  Image at right: A MERV-14 filter (white) has denser folds than the MERV-8 (green)

Fleet of the Future trains have a modernized HVAC system which, in addition to other benefits, includes: total air flow increased from 4000 cubic feet per minute to 4300; supply air ducts on the ceiling for better air flow and more cooling for standees; improved design against refrigerant leakage; and switching from an ozone-depleting refrigerant to an environmentally friendly one.

The modern HVAC units also continually communicate their performance status to the train operator and can provide fault logs and diagnostic functions to help with troubleshooting.

BART is exploring many different technologies. Another pilot, which is testing a ultraviolet UV-C lighting rod inside one legacy train car’s undercarriage HVAC unit, is still in the evaluation phase but looks promising. Image below at right: UV-C lighting rod 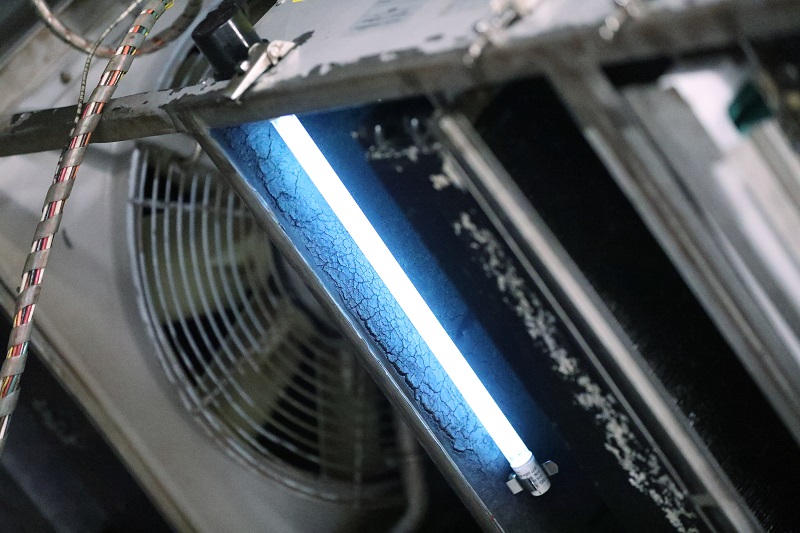 “We’re still monitoring that,” said Ben Holland, Manager of Vehicle System Engineering. “So far it’s been working well. We’re still trying to figure out how to replicate that into Fleet of the Future HVAC units.”

More good news from the UV pilot, he said, is that engineers have refined the design in order to put two UV-C bulbs instead of one, in addition to using bulbs that are 50% longer than in the original pilot design. “We’ll get three times as much light output – it’s almost like installing three bulbs. We’re still in the process of finalizing the electrical and mechanical details.”

The only hurdle may be finding suppliers. “It’s been really frustrating working with suppliers who are under the gun from everybody,” Holland said. BART will work with Bombardier, the manufacturer of the new trains, so that the UV-C lighting can become standard-issue from the factory.

“We are working on the design in-house because if we rely entirely on them to produce a design, it could take quite some time,” he said. “This is urgent and important to us and to our custome 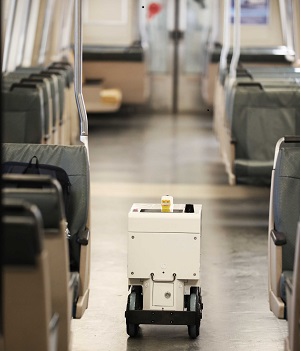 BART engineers have had preliminary discussions with scientists from the Lawrence Livermore National Laboratory regarding simulations that can mimic a sneeze or cough to quantify the flow and travel of aerosols, tiny airborne particles that can carry coronavirus or other pathogens.

“We’re in all talks with all kinds of different agencies,” Holland said. “This is being watched and scrutinized all over the world. It’s hugely important for our public.”

Chief Safety Officer Jeff Lau said BART is “actively evaluating many different technologies” that could potentially be used in the transit system to combat the coronavirus.

One product, a robot that could run through cars in their off-hours and spray disinfectant, was tested but probably won’t move forward because of difficulties in accessing the trains and moving between them, Lau said. (Trains already are disinfected with electrostatic foggers, which are applied by a human, at night.) Image at right: disinfecting robot

A smaller, Roomba-like device that can vacuum and disinfect at the same time will also get a test run.

“We are open to all different kinds of technologies and innovations,” Lau said. “We are trying to be a leader in the industry in keeping our patrons and employees safe. I’m very confident that our system will be as safe, maybe even safer, than before (Covid), thanks to enhanced cleaning and changes in behavior like wearing masks.”

BART, which travels in five different counties with different jurisdictional health orders, requires face coverings for anyone on the trains. Station Agents, BART Police Officers, Civilian Ambassadors and more are handing out free masks to anyone who needs one.

Elevators have significant air exchange by design compared to many indoor spaces and are required by code to have openings for ventilation. While riders are in an elevator for a very short duration- one minute or two, it is important to point out that fresh air is introduced every time the elevator door opens, and BART elevators include exhaust fans in the ceiling to increase ventilation.

Elevators are cleaned thoroughly at BART at least once per shift.  This means all high touch points (hand tails, buttons, floors and walls), are disinfected.  Elevators are checked once per hour thereafter until the end of the shift.  They are checked on the odd hour by System Service and cleaned if needed.  Station Agents also check the elevators, on the even hour and report any issues to System Service.  The next shift does the same.  We use a disinfectant called Tec-Cide 128, which is sufficient to kill viruses, to disinfect with.

BART continues to offer free masks at all stations to riders who need one and hand sanitizer dispensers, including accessible wall units, at every station.