The care package had a childhood Bible engraved with her name, her favorite Lord of the Rings books, and a photo album with pictures of family members.

BART Police Officer Eric Hofstein cradled the precious cargo he was hand-delivering to San Francisco General Hospital to a young woman whose life he helped save.

The woman’s mother, Cinda Romero, wanted to make sure the package arrived by last Friday, her daughter’s 32nd birthday. Romero, a registered nurse from Orange County, knew that hospital deliveries can be unreliable. Hofstein assured her he would take it directly to Dell*, who had come near death while suffering from mental illness and homelessness on the streets of San Francisco.

“It was a really bad, nightmare roller coaster,” Romero said of the years her daughter was lost to her.

Romero described Dell as “an overachiever” in her adolescence, the oldest of six siblings. She went to a prep school, studied Latin and had a bright future until her mental illness arose in late adolescence, a common age for first psychiatric breaks.

“There were so many 5150s (the code for a standard up-to-72-hour mental health hold), so many calls from random hospitals,” Romero said. Dell was among the homeless people seeking shelter in BART stations, where Hofstein focuses his outreach efforts. He gave Romero his number and became a lifeline between mother and daughter, setting up video calls and keeping on the lookout when Dell would go missing. The work that he and other BPD staff do in this area is foundational to BART's commitment to progressive policing.

“She was one of our ‘regulars,’ “ Hofstein said, with dozens of calls for service when Dell would have mental health breakdowns, usually in a paranoid and manic state. He personally was the responding officer on some of those calls. In one call, at Powell Street Station, Hofstein found Dell dangling her legs over the side of the trackway as a train approached and he was able to talk her literally off the ledge.

Each time Dell was detained on a mental health hold she would go through a revolving-door bureaucracy, he said, that put her back out on the street without follow-up care. Twice she was hit by cars while walking as a pedestrian, “totally unaware of her own safety,” Romero said.

“The system is set up to operate on weekdays from 9-to-5,” Romero said. “But people aren’t homeless and mentally ill from 9-to-5. You feel so powerless, trying to advocate for them, trying to show they are a real person and not just a statistic.” 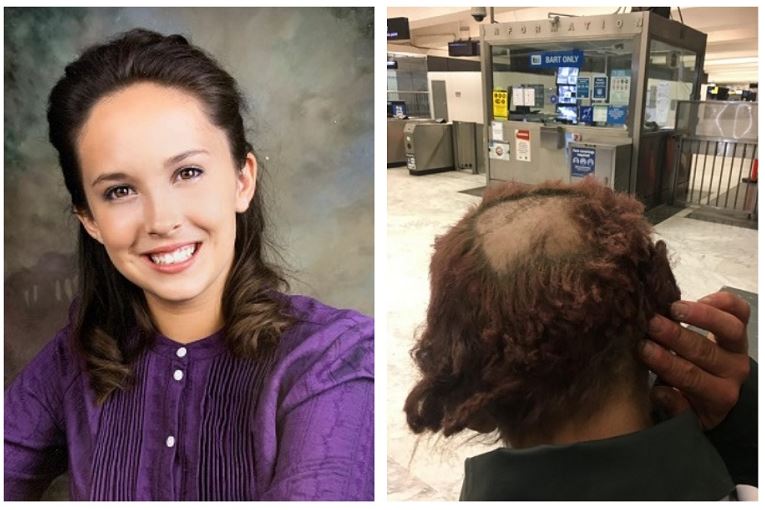 Dell in high school and in BART station after brain surgery in October. Photos courtesy of Cinda Romero.

In October 2020 there was another brush with death when Dell suffered an aneurysm on the streets and was hospitalized for brain surgery. Hofstein found Dell in a station after her surgery; she was sitting on the floor picking at a jagged scars on her partially shaved head. She bolted, leaving him to put out a “be on the lookout” or BOLO alert to all law enforcement agencies in the region.

Dell was spotted around Thanksgiving near a BART station but a social worker assigned to her case was off for the long weekend, her mother said, making it a heartbreaking holiday. Then in December, thanks to Hofstein’s BOLO, patrol officers found Dell huddled under a bridge and ultimately found her a safe spot for treatment at San Francisco General. He was out of state preparing for his upcoming retirement, but he worked the phones from afar to keep Romero informed.

Hofstein helped Romero use AB1424, a state law regarding involuntary treatment that allows family members to communicate about a relative’s mental health history. The goal is to stop the revolving door and require that decisions about involuntary treatment consider information supplied by family members. In part because of the AB1424 paperwork Hofstein filed, conservatorship for Dell was approved, paving the way for her care.

“He is a hero, a saint and guardian angel clothed in a BART police officer uniform,” Romero said. “If it weren’t for him, my daughter would most likely not be alive.” Meanwhile, Romero found support from the National Alliance on Mental Illness (NAMI). She’s advocating for her daughter’s care and trying to raise awareness about mental illness and homelessness.

Romero, who celebrated Dell’s birthday Friday with a Zoom call among family members, wants her story to give hope to other families in similar situations. “The birthday Zoom was really special,” she said. “Her sisters and brother, Grandma and Grandpa and I were all on. We sang Happy Birthday and recounted family memories. She was beaming the whole time.”

She wants other parents to know what she learned from Hofstein.

“He showed me how to be a better advocate for my child,” Romero said of Hofstein. “He helped me understand the tools that are out there. A lot of parents aren’t aware of that. You can provide a mental health history of your child to doctors, even if your child has not signed a release of information. You can always talk to a doctor, nurse, social worker, or police officer, about your child’s situation.”

When Hofstein delivered the care package last week, Dell smiled, gave him a hug, and had a coherent conversation, the first he’d ever had with her. They recorded a video for her mom. Later this week, she is scheduled to move from the psychiatric unit to a residential treatment center to continue her recovery.

“She told me she was enjoying feeling normal, feeling human again,” Hofstein said. They talked of their shared love for Tolkien.

Romero said she is eternally grateful to Hofstein that he cared about Dell as a person and worked so hard to save her. “I will always be thankful that my daughter was captured in his net of kindness,” she said.

BPD Deputy Chief Angela Averiett, who leads the Progressive Policing and Engagement Bureau, believes efforts like Hofstein’s are largely behind the scenes but important for the public to know about.

“He was determined and did not give up,” she said. “His persistence paid off in the form of getting her the real help that she needed. After all the events of 2020, we are working to change perceptions. We’re human beings and we do care.”

*Dell is a family name used as a pseudonym with permission from Romero to speak about her daughter.
_____________

You are not alone. The National Alliance on Mental Illness (NAMI) provides education, advocacy and support. Visit the website for more information. In addition, there is a 24-hour National Suicide Prevention Hotline available for anyone in crisis; call 800-273-8255.