1. Q: What was the BART to Livermore Extension Project?
A:The BART to LIvermore Project proposed to extend the BART transit system for approximately 5.5 miles from the existing Dublin/Pleasanton station eastward to a new station in the City of Livermore. The proposed project was developed in partnership with the City of Livermore. The 5.5-mile BART extension would have gone within the median of Interstate 580 (I-580) to a new station near the Isabel Avenue/I-580 interchange. A storage and maintenance facility would be provided in the vicinity of the sytem's end-of-line. The project also incorporated a network of express buses to link the new BART station and other destinations such as Downtown Livermore, the Lawrence Livermore National Laboratory, and the Vasco Road ACE Train Station. BART also evaluated a number of alternatives to the proposed project. The diagram below shows the project area.

2. Q: What were the Project Goals?
A: The primary goal of the BART to Livermore Extension Project was to provide an effective and affordable inter-modal transit connection from the existing BART system to inter-regional rail service and key activity centers in the City of Livermore. The San Francisco Bay Area Regional Rail Plan (2007) identified this connection as an important inter-regional link. Other key project benefits included providing an alternative to traffic congestion in the I-580 corridor; creating opportunities for transit-oriented development around the proposed Isabel Avenue /I-580 BART station; improving air quality, and reducing greenhouse gas emissions. 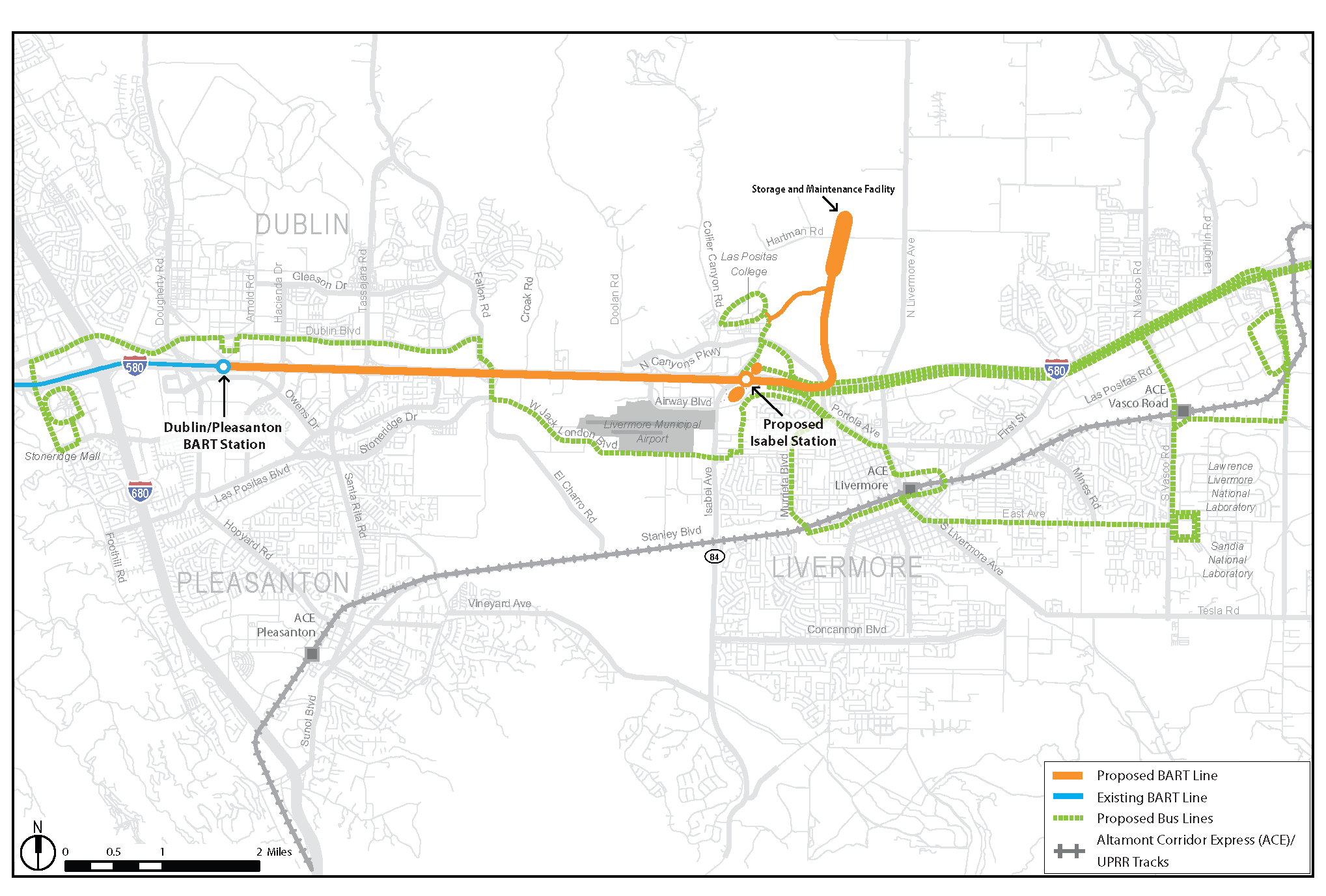 3. Q: What is an Environmental Impact Report (EIR)?
A: The California Environmental Quality Act (CEQA) requires evaluating certain projects for impacts on the environment. An EIR is a document that informs public agency decision-makers and the public of the significant environmental impacts of the proposed project. An EIR identifies ways to reduce those impacts to less-than-significant levels; usually through implementation of mitigation measures or an alternative to the proposed project.

5. Q: What was the environmental process for this project?
A: BART, as Lead Agency, issued a Notice of Preparation on August 30, 2012 to advise other agencies and the public that it would be preparing a Draft Environmental Impact Report (Draft EIR) for the proposed BART to Livermore Extension Project. A scoping meeting on Wednesday, September 19, 2012 at the Robert Livermore Community Center in Livermore allowed the public to provide verbal and written comments on the scope of the
Draft EIR. 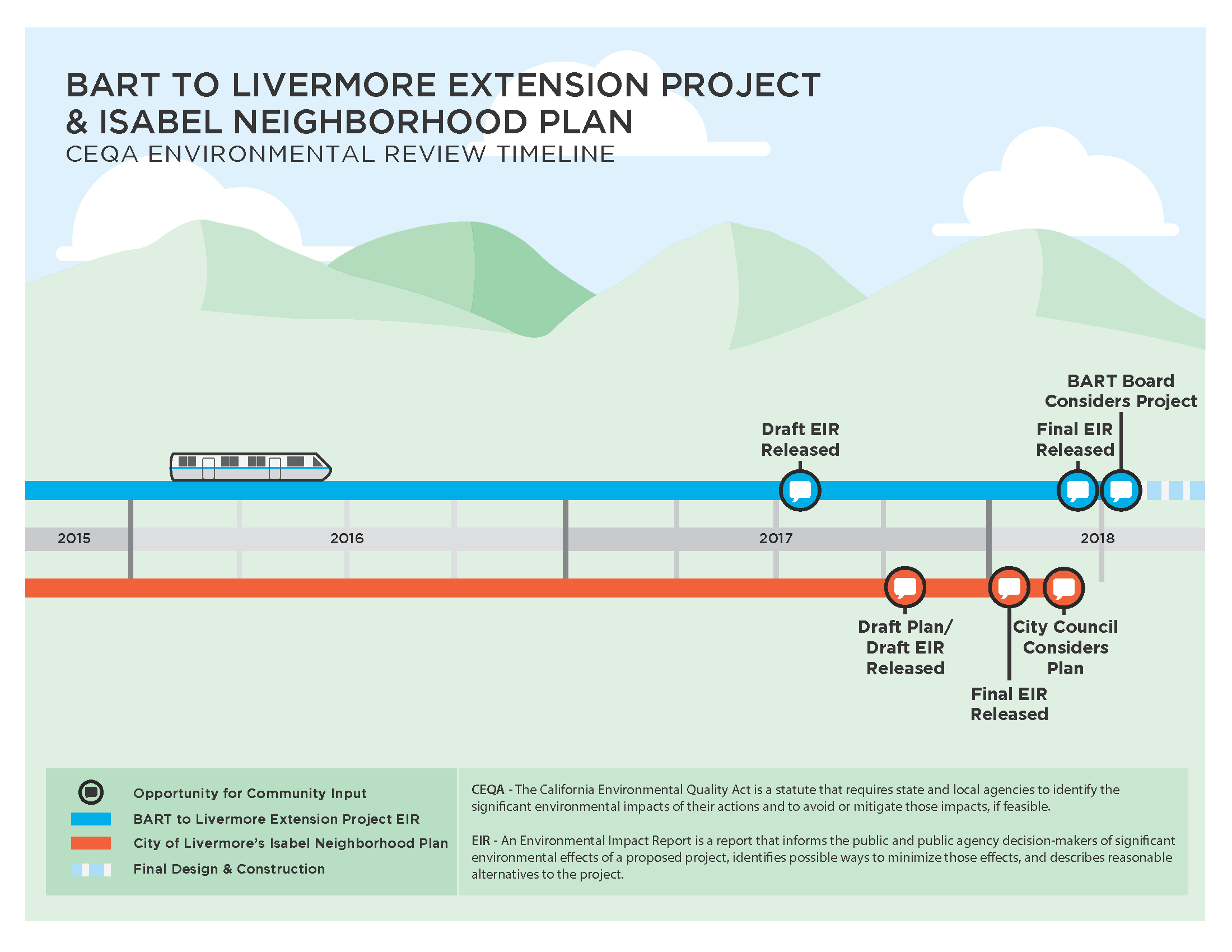 On July 31, 2017, BART released the Draft EIR that evaluates the environmental impacts of the Proposed Project and alternatives for public review.  During the public review period, agencies, organizations, and interested members of the public reviewed and commented on the Draft EIR. BART recorded all the public comments and responded to all substantive comments in the Final EIR released on May 11, 2018. On May 24, 2018, the BART Board of Directors certified the Final EIR, but decided to not advance the BART to Livermore Project.

7. Q: How is the earlier Program-level EIR different from the Project-level EIR?
A: In the initial stages of the proposed project, a Program EIR was completed for the BART to Livermore Extension and certified by the BART Board on July 1, 2010. The purpose of the Program EIR was to evaluate a number of potential BART rail alignments between the Dublin/Pleasanton Station and several potential new station locations in Livermore. However, the Program EIR did not evaluate any one alignment in sufficient detail to allow that alignment to be constructed. The Project EIR provides a detailed analysis of the proposed BART alignment in the median of I-580 between the Dublin/Pleasanton Station and Isabel interchange, as well as the other alternatives. The information from the Project EIR helped the BART Board of Directors determine whether to construct a project.

DMU or EMU Alternative – Diesel Multiple Units (DMUs) are self-propelled, diesel-powered vehicles that travel on standard gauge railroad tracks. Cars can be linked together in two or three-car lengths depending on passenger demand. BART is currently constructing a DMU extension running from the Pittsburg/Bay Point BART Station to a new station in Antioch. As an option to the DMU, BART also evaluated an Electric Multiple Unit (EMU), a vehicle similar to a DMU that uses an electric motor and receives power through a system of overhead electric cables. All other aspects of the EMU would be the same as a DMU.

11. Q: What was the City of Livermore’s relationship to the project?
A: The City of Livermore’s General Plan supports a BART extension to the City, and the City has advocated an extension within the median of I-580 to a station at Isabel Avenue/I-580 as a viable project. In addition, the City prepared the Isabel Neighborhood Plan for the area surrounding the proposed Isabel Avenue station.

12. Q: How much would the proposed project have cost?
A: A BART extension from the Dublin/Pleasanton Station to Isabel Avenue would have cost approximately $1.6 billion to design and construct. This estimate includes $300M to escalate the cost to the midpoint of construction (2024).

13. Q: How was the proposed project funded?
A: The project funds were from a number of local and regional sources. A total of $635 million had been committed to design and construct the project from the following sources:

14. Q: Who made the decision about building the project?
A: The BART Board of Directors certified the BART to Livermore Final Environmental Impact Report (FEIR) on May 24, 2018, but declined to take a position on any of the alternatives described in the FEIR.  The Board voted against conventional BART service to Livermore and voted against Express/Bus Rapid Transit to Livermore.  This decision was made following completion of the environmental review process and as part of a public process that included a public hearing before the Board of Directors.

AB 758 created the Tri-Valley San Joaquin Valley Regional Rail Authority with the goal of connecting the BART Dublin/Pleasanton Station to the Altamont Corridor Express rail service. The Authority is required to provide a project feasibility report to the public by July 1, 2019.  Any proposed project involving BART would require future action by the BART Board.

15. Q: Would there have been adequate parking?
A: The Project included 3,400 parking spaces at the proposed Isabel Station, which was projected to be sufficient to satisfy the demand for parking. The Dublin/Pleasanton Station currently has 2,900 parking spaces. A combination of garage parking and surface parking was planned for the Isabel Avenue Station area. Parking for bikes, taxis, buses and passenger loading/unloading would also have been components of the overall station design.