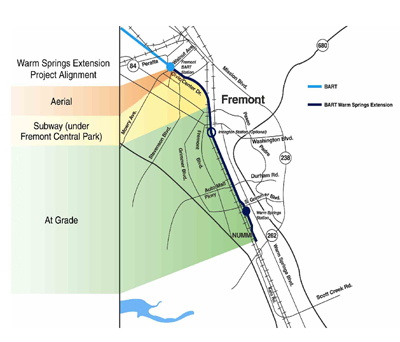 The initial segment begins on an embankment at the southern end of the existing elevated Fremont BART Station, passes over Walnut Avenue on an aerial structure, and descends into a cut-and-cover subway north of Stevenson Boulevard. The alignment continues southward in a subway under Fremont Central Park and the eastern lobe of Lake Elizabeth, and surfaces to at-grade between the former WP and SP alignments north of Paseo Padre Parkway.

Paseo Padre Parkway has been reconfigured as a vehicular underpass as part of the City of Fremont's Grade Separation Project. The Warm Springs Extension alignment passes over Paseo Padre Parkway on a bridge structure, and continues southward at-grade, passing under a grade-separated Washington Boulevard. Additionally, Washington Boulevard has been reconfigured as a vehicular overpass as part of the City's Grade Separation project. From Washington Boulevard, the alignment continues at-grade within the former WP corridor, passing through the site of the future Irvington Station, and then southward to the new Warm Springs / South Fremont Station at Warm Springs and South Grimmer Boulevards in the Warm Springs District. 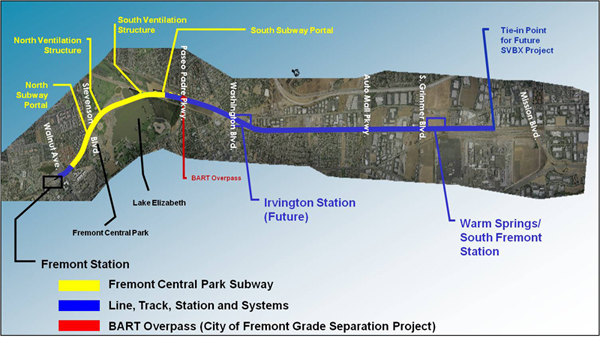 In 2007, BART devised an implementation strategy whereby the project would be constructed via two large contracts: The Fremont Central Park Subway Contract and the Line, Track, Station and Systems Contract. This approach was intended to minimize overall escalation costs and most appropriately deal with the special needs associated with the underground portion of the project in Fremont Central Park.

This contract constructed the trackway embankment south of Walnut Avenue and the BART subway from just north of Stevenson Boulevard, through Fremont Central Park, under the eastern lobe of Lake Elizabeth, and beneath the UPRR freight track to just north of Paseo Padre Parkway. The contract included construction of two ventilation structures and relocation of a number of amenities within Fremont Central Park, including the Dog Park, Basketball Courts, and related parking. Construction began in the summer of 2009 and concluded on schedule in the spring of 2013.