A big thanks to those of you who have filled out surveys or emailed comments to us about the next generation of BART train cars. Below are answers to frequent questions.  To comment on BART’s new train cars, click here.

Q1:  When did the new BART trains arrive?

A:  The first ten train cars went into service January 2018 following safety and reliability testing, and regulatory approval. New cars will arrive steadily over a period of about six years.  BART already has 775 new cars on order, with a goal to obtain enough funding for 1,200 new cars. This will provide enough cars to run 10 car trains on all peak service into San Francisco, and will increase the number of seats in the fleet by more than 60%.

Q2:  Will new seats and floors be easy to clean?

A:  Yes. We have heard loud and clear that BART riders want easy-to-clean seat upholstery and floors.

Q3:  Will the new cars be less noisy on board?

A:  Yes, BART is requiring the car builder to meet the highest standards in the United States regarding train car interior noise and noise absorption. To achieve this requirement, the new cars will have plug style doors that better seal out the noise.
Additionally, BART is changing the surface of the train wheels to make for a quieter ride. Using computer modeling technology that was unavailable even 10 years ago, the shape of the wheel has been redesigned to a slightly tapered profile that promises to not only reduce noise, but to reduce wear and tear on the rails. Initial testing shows the new wheel profile could cut noise by as much as 50 percent. All Fleet of the Future cars will feature the new wheel profile. It will take a few years to update the wheel profiles on all of BART’s existing train cars.

Q4:  Will the new train cars have as many seats as the old cars?

A:  No, the new cars will have 4.6 fewer seats on average. The new cars use thinner seat backs to help maximize seat count, and are outfitted with as many seats as can fit within the available space.

Q5:  Will you have open space to accommodate wheelchairs and luggage?

A:  Yes, the new trains include designated spaces for wheelchairs. In addition, by popular demand, BART seats are mounted higher off the floor on the new train cars, making the seats more comfortable and increasing the amount of space under the seats to stow luggage. 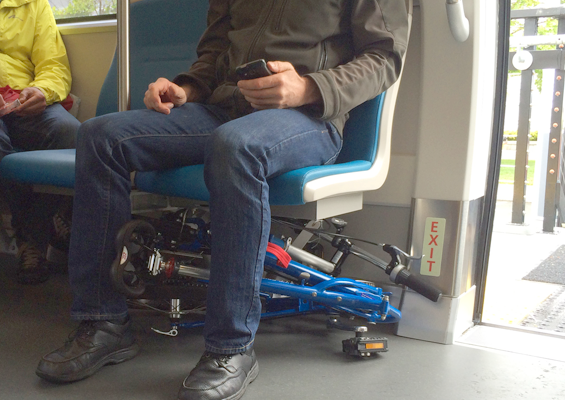 Q6:  Is it viable to have dedicated bike cars in set locations on BART trains?

A:  No, BART cars reverse directions at the ends of the lines, and moreover are continuously coupled and uncoupled in between runs throughout the day. For these reasons, it is not possible to keep a “bike car” in a predictable position on a train.  For example, a special car at the front of a train might be end up being at the back of the train later in the day. Or two 4-car trains might be joined to make an 8-car train with bike cars then in the middle as well as on the ends, greatly reducing seating for our riders.  Instead of a dedicated bike car, the current design calls for two bike areas on each car to provide a predictable and convenient place to hold bikes during times when bikes are allowed on the trains 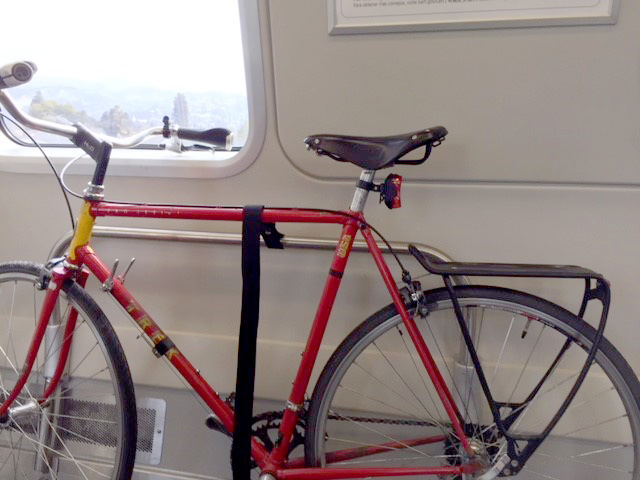 Q7:  Will the new car have more places for shorter people to hold on?

A:  Yes, they have more poles, handholds, and hand straps to better meet the needs of those who cannot reach overhead stanchions, as well as elderly and disabled customers who have told us they want more handholds near the doors to avoid losing their balance as trains accelerate or decelerate. They also include two lengths of hand straps to better accommodate riders of different heights.

Q8:  Can we have digital screens that tell us what station is the next stop?

A:  Yes, there are digital screens on the new trains (located next to side doors) to enhance passenger information. The screens display a dynamic system map, the next stop information, courtesy reminders and safety tips.

A:  No. The new cars have a maximum speed of 80 miles per hour. To go faster than that, changes would need to be made, not only to the rail car propulsion systems, but also to other BART infrastructure. Still, the new cars can help reduce travel times by having more doors, which will lessen the time needed for passengers to board and alight the train at stations.

A: Yes, final assembly of the car is in the United States and the cars contain at least 2/3 American manufactured components, including the Train Control, propulsion system, the brakes, and all the electrical wiring.

Q11:  Can BART require the new rail cars to be built locally, right here in the Bay Area?

A:  No, federal contracting provisions prohibit BART from placing any requirements on where in the U.S. assembly must take place, or where parts must be manufactured.  Nevertheless, jobs have been and will be created locally to support the design, commissioning, warranty and other activities associated with the project. (Update: On June 14, 2019 Bombardier Transportation announced it is opening a rail car assembly site in Pittsburg, California to assemble BART’s Fleet of the Future rail cars.  This work, which is currently taking place in upstate New York, will be transferred to the Bay Area over the coming months.)

A:  Yes, the new train cars are "WiFi ready." But for customers to enjoy quality WiFi service, coverage in BART stations and tunnels needs to expand. BART continues to work to extend WiFi coverage in the BART system.

Q13:  Do new train cars have charging stations for phones and other devices?

A:  No. BART recognizes that charging stations would be a valuable feature, but did not include them on the new cars because of the ongoing maintenance costs involved. Moreover, battery technology for mobile devices is expected to continue to improve dramatically in the coming years, reducing the need to charge devices during a typical BART trip (average travel time is approximately 20 minutes).

Q14:  I heard the new trains use Seattle Seahawks colors? Is that true?

A:  No, the primary Seahawks color is a dark navy, whereas the BART train cars use a traditional BART blue. The greens are also different. A 2014 survey of more than 7,000 customers showed that over 80% support the proposed color design for the new train cars.