In August 2018, BART issued a Request for Qualifications (RFQ) for a development team to advance transit-oriented development (TOD) at the North Concord BART Station.  BART received three responses from developers.  On December 15, the BART Board authorized staff to enter into an Exclusive Negotiating Agreement with a team comprised of Brookfield Residential and Novin Development Corporation (view Staff Report - PDF).

As of March 2019, the awarded developer team notified BART that they were unable to succesfully reach an agreement for the terms of their own partnership. As the team was awarded the ENA based on their joint qualifications, BART determined the need to reissue the RFQ to all of the developers that initially responded. As time is of the essence to engage with the City's ongoing specific plan process, and the initial RFQ was issued less than one year ago and very little has changed in terms of market opportunities or the development program, the RFQ was issued by invitation only to the developers who responded to the initial RFQ:

This invitation RFQ was issued on April 17, 2019. Responses were due on May 10, 2019.  Download the invitation-only Request for Qualifications (pdf).

On August 22, 2019, the BART Board will be reviewing the evaluation committee's recommendation to authorize staff to enter into an Exclusive Negotiating Agreement with Brookfield Residential.  Download the staff report (pdf). 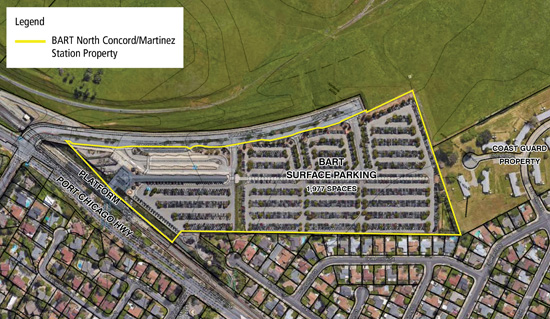 BART issued a Request for Qualifications (RFQ) for Developers on August 13, 2018.  Materials from the solicitation, including the RFQ and information from the pre-submittal meeting and Small Business Enterprise matchmaking session, can be downloaded below:

You may also sign up for email updates from the Real Estate and Property Development Department, by registering for general BART emails and selecting "Transit-Oriented Development Projects."