On November 19, 2020, the BART Board selected the developer team of Holliday Development, Related California, and Satellite Affordable Housing Associates (SAHA) to advance transit oriented development, following a competitive request for qualifications process initiated in July 2020.  BART selected the team based on their credentials and alignment of their proposed approach to the site with the City and BART's shared Goals and Objectives. The project will be aligned with the City of El Cerrito’s San Pablo Avenue Specific Plan Update (ongoing), El Cerrito’s Strategic and Economic Development Action Plans, and BART's Transit-Oriented Development related policies.

On Tuesday, May 25 at 6:00 pm, the City of El Cerrito and BART hosted a Community Meeting along with the developer team selected for El Cerrito Plaza station. These events, including the May 25 meeting, are the first of many opportunities planned for community residents and other interested people to ask questions and share comments with the project team. BART is committed to listening to the concerns of the greater El Cerrito community as we move ahead with advancing development of the El Cerrito Plaza BART property in 2021. Over the next 2-3 years, the developer and BART will work with the City to create a development concept, which will include community engagement opportunities. Before the developer can finalize its proposal, BART and the City of El Cerrito will need to make decisions about the quantity of BART patron replacement parking and whether to include a new library in the project.

BART is launching a Caltrans-funded study of station access (ways passengers get to and from the station) and replacement parking strategies, which encompasses the areas served by the El Cerrito Plaza, North Berkeley, Downtown Berkeley and Ashby stations. This broader study is to ensure a coordinated access plan for these interrelated stations as BART and the cities of El Cerrito and Berkeley are embarking on plans for future development at the El Cerrito Plaza, North Berkeley, and Ashby BART stations.

Response to Questions Received by August 11, 2020

A virtual presubmittal conference was held for interested developers and possible consultants on Tuesday August 4 at 2:00 PM, with a Networking Session held on August 14.

Responses to this RFQ were due Wednesday, September 9, 2020.

To prepare for development of its surface parking lots at El Cerrito Plaza, BART has been leading community engagement to understand parking replacement and station access options.  BART conducted a survey in January 2019 to capture and reflect the opinion of daily/frequent BART riders. For this reason, flyers were handed to people coming and going from the station during the morning and midday peaks, and were posted around the station. This survey was intended to collect information from BART customers regularly using the El Cerrito Plaza BART station, and was not intended to function as the engagement that will be done for the TOD project on a neighborhood, city, or regional level. This survey does not provide a comprehensive view of travel behavior and relies on stated preference and stated behaviors instead of observed behaviors. It is intended to guide the development of potential strategies and community outreach efforts.

To view more detail about the survey methodology and findings, please click here.

To view the original survey questions, please click here. Note that the survey was done online and uses logic in several questions to let respondents branch to appropriate follow up questions. Since the survey is no longer open, the linked document spells out the logic structure.

On May 4, 2021, the City Council of El Cerrito heard a presentation on TOD at El Cerrito Plaza BART station. The presentation covered the City’s and BART’s goals for this potential project and introduced the developer team and their ideas for the site. Meeting materials are posted here.

BART staff are excited to bring this upcoming development project forward to the community for comment and input.  BART sought input on the Goals and Objectives to be included in the RFQ for developers, which also informed the criteria for evaluating developer responses.  BART has received additional grants from Caltrans and the Federal Transit Administration to support additional community engagement and station access along the Richmond line, and anticipates future events. Updates will be provided here as the scope of work for these efforts is refined.

Below is a schedule of meetings and milestones:

Subsequent community engagement will be led by BART's selected developer team of Holliday Development and Related.

This document summarizes the themes that have risen to the surface at the meetings listed above, on issues related to development, parking, and access.  BART looks forward to continuing this conversation with the El Cerrito community in 2021.

The BART properties offered for development are depicted in the aerial map below.  These are the current BART surface parking lots. No decisions about replacement parking levels will be made until after a developer is selected, the community is involved, and a feasible project concept is created. 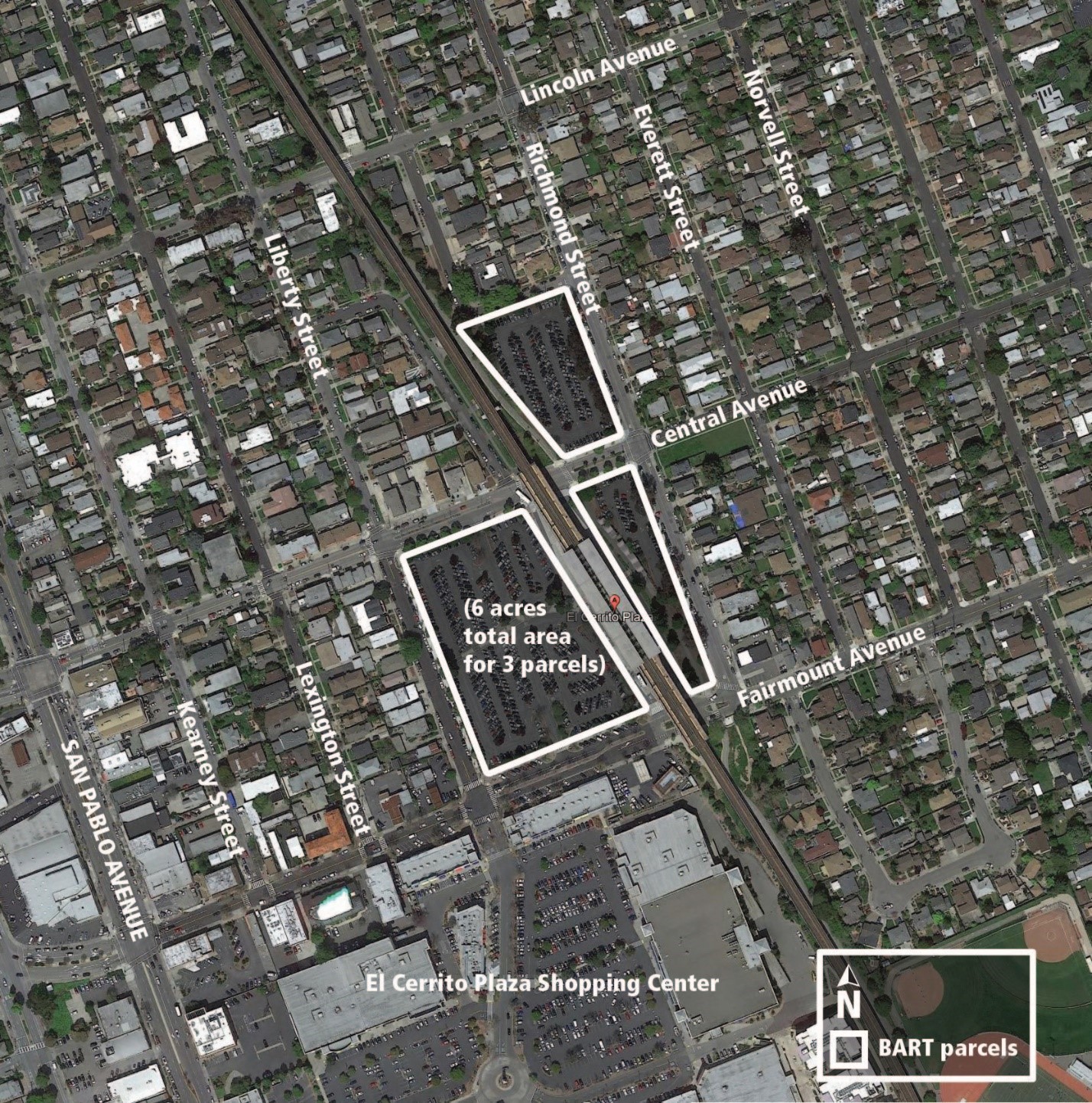 You may also sign up for email updates from the Real Estate and Property Development Department, by registering for general BART emails and selecting "Transit-Oriented Development Projects."